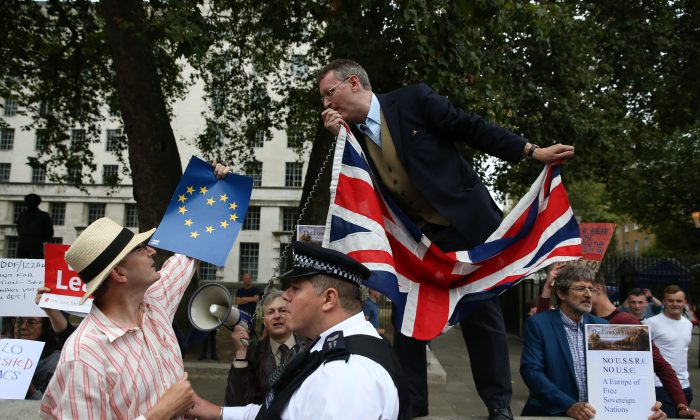 A police officer separates an anti-Brexit demonstrator from a pro-Brexit demonstrator in Parliament Square on September 3rd, 2016. The prospect of a ‘hard Brexit’ – an all-out exit from the European Union – is looking likely, business leaders say. (JUSTIN TALLIS/AFP/Getty Images)
Europe

The prospect of a “hard Brexit”, or a total divorce between Britain and the European Union, is on the rise, posing complications for businesses and ordinary citizens alike.

Prime Minister Theresa May’s government has spent several weeks consulting with businesses in order to work out its strategy in negotiating Britain’s departure from the EU.

Downing Street has little to say as to how it will play the game once it triggers Article 50, the two-year formal mechanism for leaving the 28-country bloc.

But the business leaders who took part in the first round of consultations came out with the firm impression that those backing an all-out exit from the EU and its related structures were in the ascendancy.

“There could be collateral damage” from an abrupt departure, he told AFP.

If Britain leaves the European customs union, it would not only have to renegotiate dozens of agreements but also strengthen its border controls, both for people and for the movement of goods.

It would have to rethink the way its ports, airports and international rail terminals would operate.

Some suggest that outside the EU, Britons could be forced to get visas for holidays in member states, and queue to account for all goods in their luggage.

As for the million Britons living in Europe, a hard Brexit could make their worst nightmares come true in terms of bureaucracy and finance.

Retirees would be cut out of local healthcare systems, while workers might have to obtain residency and work permits.

Meanwhile the three million EU citizens living in Britain would also be subject to the same uncertainties.

MP Pat McFadden, of the Open Britain campaign, said Britain should not “sleepwalk to a hard Brexit”, ignorant of its economic implications.

“The government has been slow to realise what would be involved in leaving the single market and customs union. Businesses are desperately briefing ministers on this but there is an urgent need for a proper assessment which should be shared with the public,” he said.

John McFarlane, chairman of Barclays bank and TheCityUK lobby group, told the Financial Times newspaper: “The danger of hard talk now is that it increases uncertainty, reduces confidence and will result in businesses triggering their exit plans from the UK.”

The prevailing vagueness since the June 23 referendum vote to leave the EU has irked business leaders, who fear for London’s place as an international finance hub – and for the economic wellbeing of Britain and its citizens.

“The City as a whole will be doing everything in our power to limit uncertainty coming from the Brexit vote and act swiftly to reassure businesses and ensure continued investment in our country,” Mark Boleat, policy and resources chairman at the City of London Corporation, told AFP.

Britain’s departure from the EU does not necessarily mean that it will leave the European single market, nor the customs union.

But Brussels has warned several times that Britain cannot expect full access if it curtails the ability of EU workers to relocate freely to Britain – cherished by businesses, but a key reason why many voted for Brexit.

Among All Uncertainties After Brexit Vote, Low Growth Is Sure