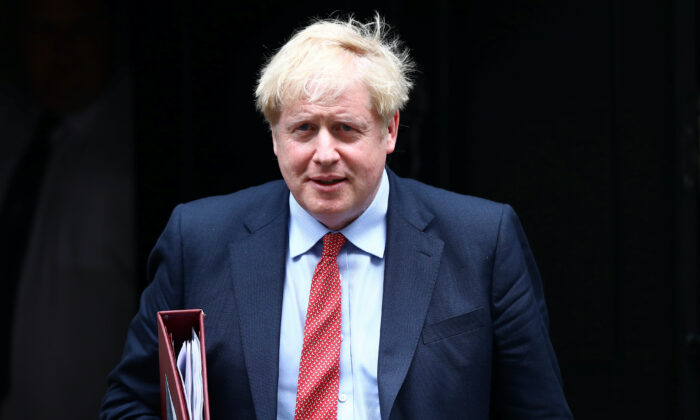 Britain has announced an extra £24.1 billion ($31.8 billion) in military spending, as part of the country’s biggest investment in defence since the cold war that ended 30 years ago in 1991.

The spending will be over the next four years, Prime Minister Boris Johnson told the House of Commons on Thursday.

This is £16.5 billion ($21.7 billion) more than was pledged in the government’s 2019 manifesto (pdf), exceeding the amount of the country’s NATO pledge and raising defence spending, Johnson said, to at least 2.2 percent of GDP.

Of Britain’s NATO allies the overall £190 billion ($251 billion) investment is second only to that of the United States, Johnson said.

He added that it serves to protect Britain’s “interests and values” and bolsters the ability to “join the United States and our allies to defend free and open societies.”

The increased spending focuses on space and cyber defence and will create 40,000 new jobs helping the country’s CCP (Chinese Communist Party) virus-ravaged economy, the government said in a statement.

By investing in the country’s “fantastic shipyards” the funding will be “spreading prosperity to every corner of the UK,” Defence Secretary Ben Wallace said.

Johnson said he had taken the funding decision “in the teeth of the pandemic” because “defence of the realm and the safety of the British people must come first.”

To meet the “evolving threat” since the Cold War the government acknowledged a continuing need to invest in traditional defense while pivoting markedly towards “leading, cutting-edge technology.”

It said this was needed to combat the “increasingly sophisticated ways, including in cyberspace,” of Britain’s self-interested enemies.

“We will modernise the equipment and improve the capability of our world-class Armed Forces and intelligence agencies,” the government said.

“We will adapt to new threats, investing more in cybersecurity and setting up the UK’s first Space Command,” it added.

The government’s emphasis on modernising the military comes following a warning earlier in the week from one of the country’s top defence chiefs of the vital need to understand “what malign actors are doing in space.”

With countries like China and Russia developing anti-satellite capabilities he said it would be “odd to assume” that “potential adversaries”  would allow the “unique operational advantage” Britain and its allies have enjoyed to continue unhindered.

Johnson said the international military environment is “more intensely competitive” than at any time since the Cold War, but Britain must be true to its history and stand with its allies.

“To achieve this we need to upgrade our capabilities across the board,” he said.

Britain now has a chance “to end the era of retreat, to transform our Armed Forces, bolster our global influence, unite and level up across our country, protect our people and defend the free societies in which we fervently believe,” Johnson told lawmakers.

Though welcoming the new defence funding Leader of the opposition, Labour’s Kier Starmer criticised the government for a “lack of self-awareness” on past under funding and accused Johnson of having delivered a “spending announcement without a strategy.”

He questioned how the funding would be paid for amid, due to the government’s “handling of the pandemic,” the “sharpest economic downturn of any G7 country.”

The funding announcement is the first from the government’s Integrated Review which will conclude next year.

Wallace said the “excellent news” on the funding would give the military the “financial certainty” needed to update, plan, and adapt to modern threats.