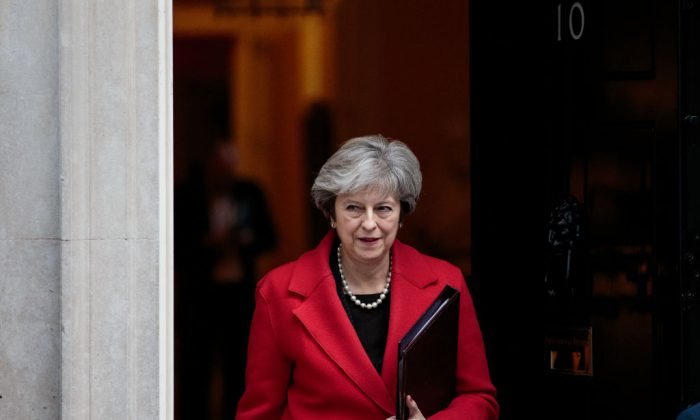 British Prime Minister Theresa May leaves Number 10 Downing Street on Nov. 13, 2017 in London, England. Mrs May held a meeting with European business leaders over their concerns about the future of UK-EU trade arrangements after Brexit. (Jack Taylor/Getty Images)
UK

The EU and Britain have agreed the size of the so-called “Brexit bill”, meaning that talks can now progress to the next stage, according to The Daily Telegraph.

The final figure of the divorce deal has been left open to interpretation said the newspaper, which cites two unnamed sources, but it will be between 45 and 55 billion euros.

The agreement paves the way not only for talks to progress, but steers Brexit a little further from the “no deal” option which would result in a “hard Brexit.”

The two sources said that an agreement-in-principle has been struck over the settlement, which the EU had demanded must be resolved before talks could progress.

However, a breakthrough on the “Brexit bill” issues would, in theory, mean that divorce talks can progress to the two other major issues waiting in the wings: the role of the European Court of Justice, and the issues around the Northern Irish border with Ireland.

“The deal on the money is there; it’s now the ECJ question and Northern Ireland that are the outstanding issues ahead of the Council,” said a senior source involved in the negotiations, according to The Telegraph.

The newspaper quotes a third source with knowledge of the negotiations as saying that the text of the deal could provide the EU with the certainty that the final figure will be in excess of 50 billion euros.

This could create the political wiggle-room needed for the UK government.

A spokesman for the Department for Exiting the European Union said that “intensive talks” were continuing ahead of next week’s meeting.

“We are exploring how we can continue to build on recent momentum in the talks so that together we can move the negotiations onto the next phase and discuss our future partnership,” he said, according to The Telegraph.