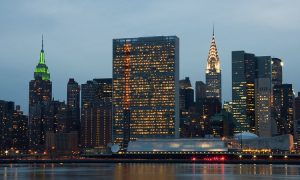 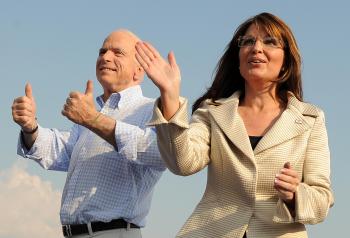 By Mimi Li
Print
NEW YORK—Alaskan Governor and Republican vice-presidential nominee Sarah Palin and her husband abruptly announced Monday that their 17-year-old daughter Bristol Palin was pregnant. In a statement released by the Palins through the McCain-Palin campaign, Sarah and Todd Palin said that they were “proud of Bristol [Palin]’s decision to have her baby and even prouder to become grandparents.”

The Palins added that not only does Bristol have their “unconditional love and support,” Bristol and the baby’s father planned on getting married in the near future.

Feldman also stated that Bristol Palin’s pregnancy was an issue that McCain knew about amidst his selection process for a running mate.

“This came up in the vetting process and this was something Senator McCain was aware of well before he made the decision,” he insisted.

Sen. Barack Obama, in widely quoted sources, told reporters in his Monroe, Mich. appearance that Bristol Palin’s pregnancy should be “off limits” to politicians.

“This shouldn't be part of our politics,” Sen. McCain’s presidential opponent said, adding, “It has no relevance to Governor Palin's performance as governor, or her potential performance as a vice president.”

Noting that he was born when his mother was only 18, Sen. Obama “strongly urge[d] people to back off these kinds of stories,” declaring that Bristol Palin’s pregnancy “shouldn’t be the topic of our politics.”

Sarah and Todd Palin, in their own statement, also insisted that the media lay off the young couple.

“We ask the media to respect our daughter and [Bristol’s boyfriend] Levi's privacy as has always been the tradition of children of candidates,” the Palins wrote.

According to the McCain camp, the McCain campaign and the Palins announced the pregnancy in response to intensified rumors surrounding Sarah Palin’s youngest child, Trig.

Some liberal bloggers had accused the 44-year-old VP nominee of allegedly faking the pregnancy and birth of Trig in order to cover-up her daughter's pregnancy, claiming Bristol Palin is the child's real mother, and Sarah the grandmother.

"There's no doubt that liberal blogs … and some in the mainstream media were pushing a false story about Governor Palin's most recent pregnancy with fervor," McCain adviser Nicolle Wallace told Reuters.

In response to accusations that the Palins were attempting to conceal the pregnancy from the public, Feldman said, “To characterize this as something we were trying to hide from voters is just inaccurate.”

According to Feldman, conservatives welcomed the news of the new Palin baby.