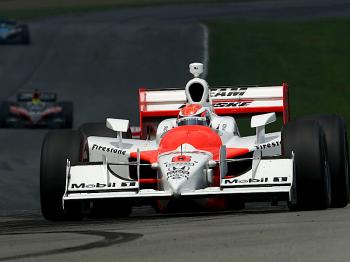 "What a weekend for Team Penske. It really couldn't be better,” Ryan Briscoe told reporters. “It just feels so good to get this win. It's been a rough couple of weeks in the lead up to here, and this one's sweet for sure.”

Mid-Ohio is a 2.6-mile, 13-turn road course, well-suited to the road-course contingent. Mid-Ohio is a challenging and physically demanding track, with blind corners, off-camber corners, two 180-degree turns, and a three-turn rhythm section that favors smoothness and precision.

Two heavy thunderstorms had rolled through the Ohio River Valley in earlier in the day, soaking the track, so most drivers started on rain tires. But the track dried quickly in the first several laps, so most of the field came in during the first five laps to get slicks.

On lap nine Ryan Hunter-Reay tried to pass Enrique Bernoldi on the inside, pushed too hard on the damp track, and forced both cars into the sand trap. Bernoldi was not able to restart and had to retire.

After the restart on lap 14 the order was Vitor Meira, Darren Manning, Will Powers, Marco Andretti, and Helio Castroneves.

The yellow flag came out again on lap 24 as Mario Dominguez lost his rear wing on back straight. Pit stops were crucial in establishing running order as none of the top five cars before the yellow were there after the green on lap thirty.

Justin Wilson got a great jump on the restart and took the lead, followed by Dan Wheldon, Jaime Camara, Ryan Briscoe, and Ed Carpenter. Briscoe passed Camara, and the Ed Carpenter set his sights on Camara. Marco Andretti spun off the course, but didn’t draw a caution. He drove back on course, down in 20th place.

Justin Wilson started flying, opening a four-second lead on the pack. Then on Lap 38, Milka Duno spun and stalled coming through turns eleven and twelve, blocking the track, and bringing another yellow. This eliminated Justin Wilson’s hard-won lead, as everyone came into the pits under yellow and Wilson lost his lead.

Dominguez agreed that he had planned to let Wilson Through” “Regarding the incident with Justin (Wilson), I was planning to let him by, but he went on the outside there and I held as tight as I could. I wasn't expecting him to be on the outside there, but it was my intention to let him through, so that is shame.”

When the race went green on lap 47, the original leaders were back up front: Ryan Briscoe, Mario Moraes, Will Power, Helio Castroneves, and Scott Dixon were the top five.

On lap 67, Graham Rahal spun in the Carousel. Simultaneously, Danica Patrick dove into the pits for fuel and rubber, setting her up to finish the race with no more stops.

Briscoe built up a six-second lead before coming into the pits, coming back out in sixth spot but good to go the distance.

After the cycle of pit stops, the order was Ryan Briscoe, Bruno Junqueira, Helio Castroneves, Scott Dixon, and Will Power, as Dixon made an excellent pass of Power coming out of the Carousel.

For Dixon and Castroneves, the race was as much about points as winning: Dixon had the series points lead, 63 points ahead of Castroneves. Castroneves was as concerned with not losing points to Dixon as with catching Ryan Briscoe

Bruno Junqueira had to pit for fuel with eight laps to go, dropping him from second to eleventh, bringing Oriol Servia into fifth.

Briscoe was running much faster than the rest of the field; he opened a ten-second gap. Through the last half-dozen laps the only action was the battle for eleventh, where Bruno Junqueira tried unsuccessfully to get around Danica Patrick.

Briscoe slowed through the last few laps, making sure he made no mistakes, to bring it home for the win. Helio Castroneves finished second, giving Penske racing a one-two finish, and keeping Castroneves second in the point standings.

Edmonton is the next stop in the IndyCar tour, a road course where IRL has never raced before.