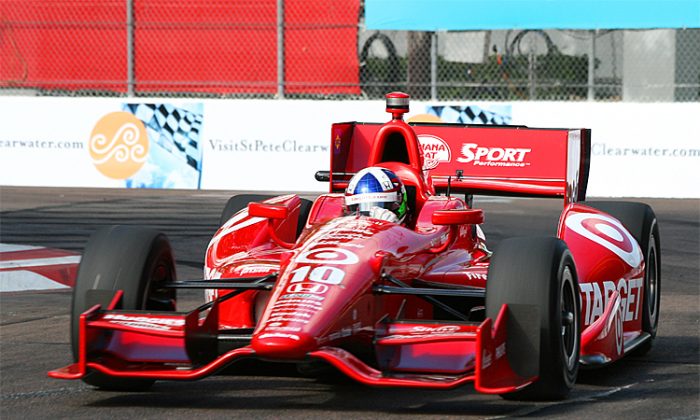 Ryan Briscoe won Penske Racing its third pole in three races, but will start from 11th due to the penalty. (James Fish/The Epoch Times)
Motorsports

Despite being fourth fastest in qualifying, Dario Franchitti will start from the pole for the IndyCar Toyota Grand Prix of Long Beach. The Target-Ganassi driver uses Lotus power; all Chevrolet drivers were penalized ten grids spots for unscheduled engine changes mandated by the engine manufacturer.

Briscoe’s lap set a new record for Long Beach and also earned him one championship point and $10,000

Franchitti had a rough first two races, apparently he has finally figured out the new car. His lap of 1:09.0327 at 102.630 mph didn’t earn him the point for winning pole, but it did show that the #10 Dallara Lotus is back on the pace.

“We definitely missed a lot in Barber qualifying and St Pete race,” Franchitti told MRN radio. “Barber race we were pretty good. We tested at Sonoma last week; the boys on the Target team did a good job there again, and we made some progress to get in the Fast Six was good.

“I’d like to have had a go at the pole but it was in the back of my mind that we’d be starting on the pole regardless of what happened there.

Chevrolet told all its teams—eleven cars—to use new engines after a problem showed up in testing at Sonoma Monday. Franchitti said he agreed with the rule that all engines had to be able to run a certain number of miles, with penalties for engines that were not durable

“I think the Honda guys could have built an engine with a bit more power in tot too if they knew it didn’t have to make the full mileage. Those are the rules; that’s why the rules are in place. It’s very bizarre though—it’s very bizarre.

“It’s going to be a battle all year with the three manufacturers and its going to be very, very interesting from the ovals to the street courses to the road courses. I am happy for today and we’ll see what happens tomorrow.”

Ryan Briscoe set the record, won the point, but starts mid-pack, Still he felt that his achievement was important. “Yeah, it’s huge to get the pole around this track at Long Beach; it’s pretty satisfying,” Briscoe told MRN. ‘It’s a tough track, it’s fast and the boys here a Team Penske gave me a great car here today.

“We’re trying to reward the guys for all the work they’ve put in off-season because it has been absolutely flat out with this new car the new Chevy engine. I am proud of all the work everyone’s done—I just wanted to go out and drive the wheels off the thing.”

Briscoe was philosophical about the penalty and optimistic about his chances in the race.

“I got to trust [Chevrolet’s] judgment obviously it is disappointment to be docked ten spots but if that means we’ll get through the race trouble-free and not blow up in the race that’s what counts. I guess I’m starting eleventh; last I started twelfth and finished second, so we’re moving up a spot maybe.”

The big surprise of qualifying was that IndyCar rookie Joseph Newgarden, driving for the underfunded Sarah Fisher Hartman Racing, qualified seventh, nearly making the Firestone Fast Six. Since he uses a Honda engine, he will start second, on the outside of the first row.