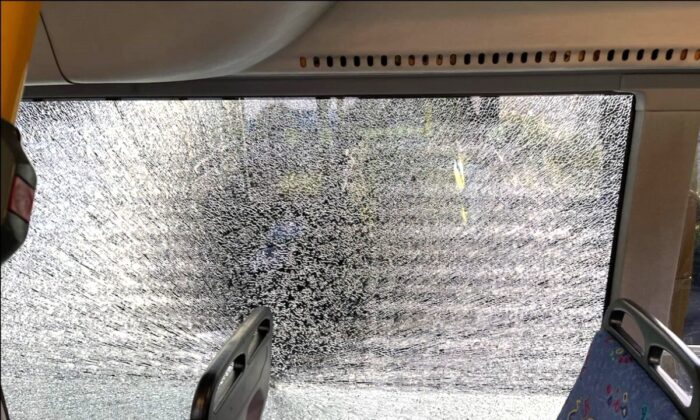 Passengers were seated here when a rock was thrown at the side of a Brisbane City Council bus. This occurred Jan. 13, 2023, at 5:40pm. (Courtesy of the Rail, Tram and Bus Union)
By Daniel Y. Teng

Violent incidents on Brisbane’s public transport system have spurred bus drivers to boycott travelling into the lower socio-economic areas of Inala and Forest Lake—two suburbs within the electorate of state Premier Annastacia Palaszczuk.

The move comes as Australian authorities grapple with a youth crime wave that has gripped Queensland and the central town of Alice Springs.

The Rail, Tram, and Bus Union says drivers have been assaulted and buses vandalised, according to a Jan. 20 email update.

“The safety of our bus drivers is still at imminent risk. The measures put in place so far are simply not enough to deter the youth gangs threatening and attacking our members,” the union said.

“After days of consultation with relevant parties, there is still no effective remedy for the safety of our bus drivers in response to the continued violence.”

The union says it had “no other option” but to issue a Provisional Improvement Notice.

“Effectively this means that buses on these two routes will no longer continue further than Stop 67 (Blunder Road, Oxley) for the 100 outbound and Stop 59 (Mortimer Road, Acacia Ridge North) for the 110 outbound from 6:30 p.m. today to last service, every Thursday to Sunday until the safety concerns are immediately dealt with.”

The no-go decision will hamstring regular bus users living in Inala and Forest Lake. Both suburbs are characterised by their large migrant communities, lower socio-economic status, and high crime rate.

They also fall within the electoral district of current Queensland Labor Premier Annastacia Palaszczuk, which has been a Labor-held seat for 30 years.

Yet recent incidents have spurred union leaders to make the drastic move.

“Since Christmas, it has gotten even worse; there have been about 24 incidents; assault, spitting, abuse, threatening drivers, passengers attacking the bus from outside with bottles and rocks,” he told The Australian newspaper.

“That is what happens when you enter these danger zones.”

In an interview with the Australian Broadcasting Corporation, Brown said the two suburbs were “head and shoulders” above every other route in Queensland in terms of violent incidents.

One driver, who chose to remain anonymous, told the public broadcaster that he would approach a bus stop, and once he’d opened the doors, “10 or 12 people appear out of nowhere and just swarm onto the bus.”

“When drivers are approaching the Forest Lake or Inala area, their anxiety levels are going through the roof.”

Brown said that the catalyst for the union to decide to boycott the suburbs was when a rock was thrown at a bus window where two female passengers were sitting.

“The girls were terrified and vowed never to catch a bus again,” he said.

Brisbane City Council has stated that it has already introduced CCTV cameras, barriers, emergency buttons, duress alarms, and GPS on every bus. It has also increased the number of security guards on the relevant services.

Yet law enforcement powers are within the ambit of the state government.

Queensland Premier Annastacia Palaszczuk has stood by a suite of new laws to tackle the issue, including upping penalties for crimes committed at night, increasing the maximum penalty for stealing a car, and raising penalties for boasting about crime online.

“These measures will be targeted in hot spot areas in the Brisbane, Townsville, and Gold Coast regions,” she said.

The premier’s actions came in response to the fatal stabbing of 41-year-old Emma Lovell in Brisbane’s North Lakes.

Lovell with her husband—both new migrants from the United Kingdom—were defending their home from two 17-year-olds who broke into their property at around 11.30 p.m. on Boxing Day (Dec. 26).

Lovell suffered stab wounds to her chest and later succumbed to her injuries. Her husband was treated at the hospital.

Meanwhile, just last week, a 43-year-old was fatally stabbed in the inner-city suburb of Wilston allegedly by a 17-year-old wielding a 45-centimetre-long knife that authorities have described as “almost a small machete.”

Queensland federal Senator Matt Canavan has said incidents of law-breaking have increased since 2019 since the current government changed the Youth Justice Act to be softer on imprisonment.

“In the words of the government’s Explanatory Note about these changes, they had the ‘objective of removing legislative barriers to enable young people to be granted bail,” he wrote in an op-ed in News Corp’s The Courier Mail.

“The changes told judges that the principle should be ‘detention as a last resort,’ and that ‘the bail decision-making framework’ incorporated an ‘explicit presumption in favour of release.’”