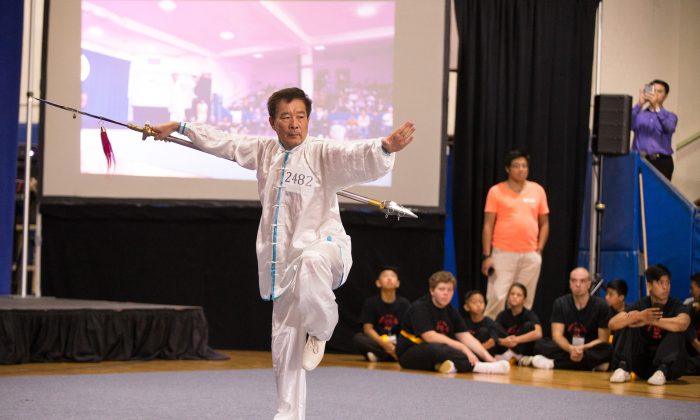 Bringing Chinese Martial Arts Back to its Traditional Virtues

At 90, Chao Fu-lin of Taiwan isn’t quite what he used to be, but his skills with the various weapons and methods of ancient Chinese martial arts remain impressive. On a recent weekend at a gymnasium in upstate New York, he moved agilely and gracefully across the floor to a crowd of fans—on the surface partaking in an international competition, but in essence joining a movement to reinvigorate the semi-mystical heart of Chinese kungfu.

Drawing male and female contestants from eight countries and across 80 years of age, the competition seeks to encourage authentic martial arts, known as “wushu” in Chinese. Contestants performed in armed and unarmed groups, as well as individual or pair demonstrations.

For the wispy sideburn-sporting Chao, who lives in Taiwan but was born in central China at a time when warlords reigned supreme, the event came as an honorable and possibly final opportunity.

“NTD is truly promoting Chinese martial arts,” Chao said. “I am nearly 90 years old. In the past two years I have trouble raising my legs. If I don’t come out to support it, I won’t get the chance again.”

What sets NTD’s competition apart is its humble focus on tradition and virtue. For those like Chao, who have seen what decades of ideological repression, then commercialization, can do to an ancient artform, the event in Middletown comes as a welcome return to authenticity.

As a people venerating order and refinement, the ancient Chinese paid attention to virtue and morality—even in combat. Men strove to be “skilled in both the civil and the martial,” a term so regarded that it evokes the image of stately advisers and officers at the imperial court. In the opening lines of the “Art of War,” strategist Sun Tzu states that victory goes to the army whose commander more thoroughly grasps the Tao, or Way.

Central to the Middletown competition’s philosophy is the concept of martial virtue, known as “wu de” in Chinese. This taps the spiritual marrow of traditional martial arts, used only to defend against injustice, and not for aggression.

“This competition is unlike any competition for profit,” said Wu Cheng-han, a Taiwanese contestant and practitioner of the Eight Extremities Fist style. “It is about respect, respect for what is greater than all of us. And this is the spirit of Heaven. This is similar to how martial artists bow, how they show humility and respect to their grandmasters, Buddhas, and Heaven.”

Chin Li-yen, who has served as the bodyguard for four presidents of Taiwan, is also a master of Eight Extremities Fist method of northern Chinese wushu. This school was originally a secret method practiced by imperial guards in the Qing Dynasty, and contains a wide range of lethal moves.

Given this, morality is paramount, Chin told NTD. “Winning lands you in court; losing gets you in the hospital,” he said. “So it can’t be about winning or losing.”

Gold prizes at the competition included five swords specially forged for and donated to the event by famous Taiwanese master Ch’en Chong-chih. The five gold prize winners, decided by a board of judges, also received $5,000 each.

Master Li Peiyun, who runs a wushu school in New Jersey, is selective about his students. “I consider foremost their moral character,” he told NTD. “If this person’s character can serve to promote and uphold Chinese martial arts, we will impart to him a relatively orthodox set of theory, methods, and fighting techniques.”

His students take his teachings to heart. Therapist Brian Nguyen, one of Li’s students, treats his clients using principles he learned from wushu, with the hope of helping them “cultivate themselves.”

“They actually love it but they don’t know it’s available,” he said. “When I show them that, they’re excited to see it because it’s very fluid, it’s very beautiful, it looks very peaceful, but it looks very intense.”

Despite the popularity of kung fu films, Nguyen said that Chinese martial arts are not well-known in the West compared with their Japanese or Korean counterparts. “When I found out that I loved wushu or Chinese kungfu, not taekwondo or karate, I looked for the nearest wushu school I could, and then I found Master Li’s school,” Nguyen said.

“What we learn here can be used to defend ourselves, but we’re taught to be very peaceful,” he said. “I’m very confident in everything I do, not just in my martial arts and physical ability, but in my life all round. Master Li has helped me immensely, helped cultivate that and allowed it to grow.” Nguyen performed a Mantis Fist method in his presentation.

Wushu is not the sole domain of men, and is closely related to classical Chinese dance. Throughout history, women have also practiced martial arts, and female contestants from multiple countries took part in the competition at Middletown.

Ch’en Ching-I, the bronze medal winner of the women’s weapons category, is from Taiwan, and her weapon is a pair of 6 pound iron rulers—dagger-like defense implements.

“I took part in this competition for the purpose of promoting traditional martial arts,” Ch’en said.

Describing her training: “I didn’t know how to exert strength for the different moves. I thought all I had to do was use all my power. Slowly I came to understand that there must be softness within power, and power within softness, and sometimes it is about unleashing an instinctual energy. This is a process of cultivating the mind. I slowly learned about humility and I become more easy going.”

“Traditional Chinese wushu has been passed down for a few thousand years,” said Li Youfu, head judge at the competition. According to this renowned master from Beijing, the rich inner meaning and history of wushu lend themselves to faith in divine principles.

“As for its earliest roots, there’s the saying: divinely-imparted culture,” he told NTD.

But in the present, genuine wushu faces an existential threat, Li believes. During the Cultural Revolution in the 1960s and 1970s, traditional wushu masters were persecuted and marginalized, causing the martial arts to lose much of their original character.

The practice of wushu was further degraded as commercial interests crept in, encouraging an emphasis on flashy superficial movements at the expense of ancient subtlety. Wushu of the new schools has been mixed with moves from ballet and other disciplines, bringing it out of touch with its origins.

“In mainland China, traditional wushu has been completely transformed,” Li said. “Movements of the internal schools have been adulterated.”

Li Youfu calls upon practitioners of traditional wushu to take part in the competition and promote their traditional disciplines and martial virtue on the global scene.