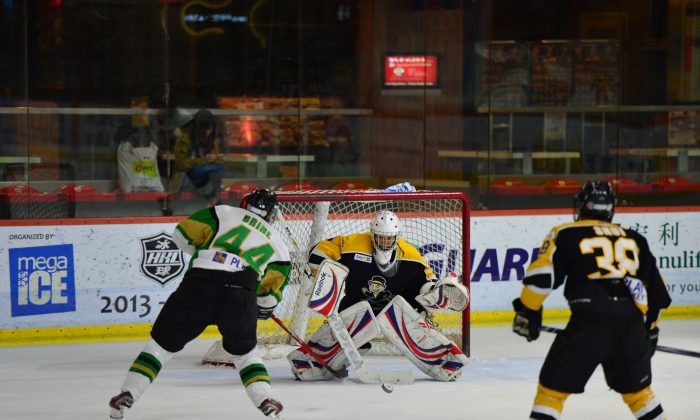 Macau Aces’ sealed the top spot of the 2013-14 China Ice Hockey League season proper when Andy Brine scored the winning goal in overtime against the Hong Kong Tycoons in another action packed evening at Mega Ice on the weekend. The in-form Aces have proved that they are the team to beat when play-offs begin next month.

With just two rounds of the league remaining Macau Aces have already secured the top spot, but it is still all to play for in the minor placings with South China Sharks (14), Hong Kong Tycoons (13) and Kowloon Warriors (12) before going into the end of season playoffs.

Warriors vs Sharks
Although Sought China Sharks got off to a good start with a brace of goals by Jordan So, the Kowloon Warriors pulled a goal back half way through the first period when Eric McKenna went on the attack to bring the score to 2-1.

In the second stanza, Warriors’ Kory Falite scored twice in the first two minutes to take Warriors into a 3-2 lead. Although Anthony Devoltz equalised after 5 minutes, Greg Smyth pushed the Warriors ahead again and Falite nailed his hat-trick late in the period while Sharks goalie, Cody Drumm had been sidelined, to make the score 5-3.

Greg Smyth and Eric McKenna stretched Warriors lead to 7-3 in the first 2 minutes of the third period. Devotz and Jamie Stark pulled two back for Sharks, but Falite added another brace to make it a resounding 9-5 win for Warriors.

The 3-Star awards all went to Warriors—Kory Falite (5-goals and 3-assists), Grant Phillips (43 saves) and Eric McKenna (2-goals and 2-assists).

Aces vs Tycoons
The match between Macau Aces and Hong Kong Tycoons was very close all the way through.

Aces were just in front 2-1 after the first period with goals by Alvin Sham and Christian Long for Aces and one by Adam Maglio for the Tycoons.

In the second stanza, just one goal by Darren Winia pushed Aces into a 3-1 lead.

But in the third period, after Long increased Aces lead to 4-1, the match looked finished … however, not for the Tycoons who rallied and with goals by Hampus Hubinette (2) and Don Ho equalised for an overtime sudden death duel.

However, Andy Brine assisted by Long soon put the matter to bed for the Aces scoring in the first minute of OT.