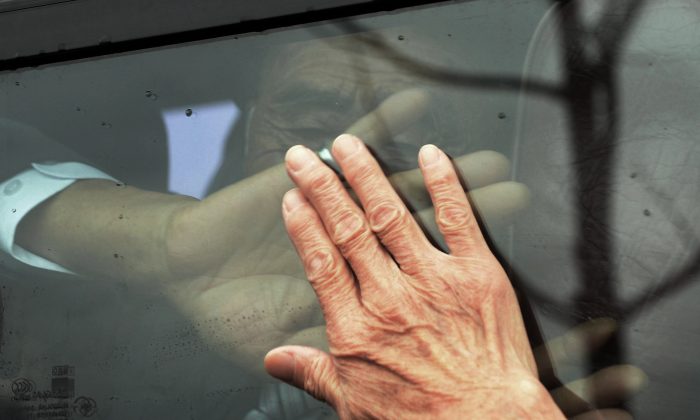 North Korean Oh In Se, 83, on a bus and his South Korean wife Lee Soon-kyu, 85, put their hands on a window after the Separated Family Reunion Meeting at Diamond Mountain resort in North Korea, Thursday, Oct. 22, 2015. (Choi Dong-joon/Newsis via AP)
Asia & Pacific

SEOUL, South Korea—A silver-haired South Korean woman adjusted her 83-year-old North Korean husband’s necktie. He held her hands and stroked her shoulder. Before this week, they hadn’t seen each other since war tore them apart 65 years ago, and there is no reason to believe they will ever see each other again.

“Let’s meet again in the afterlife,” Oh In Se told his 85-year-old wife, Lee Soon-kyu, during their final meeting Thursday at the North’s Diamond Mountain resort. “Be healthy,” his wife replied. “Live long.”

Their bittersweet parting was among many at the close of the first round of three-day reunions of hundreds of elderly Koreans on opposite sides of the world’s most militarized border for more than six decades.

About 390 South Koreans, many in wheelchairs, traveled to the resort to reunite with their relatives under humanitarian reunion programs that the rival Koreas occasionally hold. Another group of 250 South Koreans will visit from Saturday through Monday.

Lee and Oh and the others are the lucky ones. Many have died before getting the chance. More than 66,000 South Koreans are on a waiting list.

Oh was 17 and Lee was 19 when they married in late 1949. After living together for less than seven months, they were separated during the turmoil of the Korean War, which broke out in June 1950. Lee was pregnant with their son, who is now 65 and accompanied her this week.

She raised their son on her own, making money from needlework and farming, and never remarried. She lives in the same house that she lived in as a newlywed with Oh. Until she recently learned that Oh was alive and looking for her, she assumed he had died and held an annual memorial service for him.

Some South Korean media reported that Oh had remarried, but during their reunion he told Lee that he has never stopped thinking of her.

She thanked him for being alive. Their son, Jang-kyun, knelt on the floor and made a deep traditional bow. The father and son later laid their hands on the table and marveled at the resemblance.

The next day, when their son jokingly asked his father not to tease his mother, Oh said: “I’m doing this because I love her.”

When Lee asked, “Do you know how big love is?” Oh replied, “Yes, I know. It’s the same thing as when a young man and woman meet and live together until they die.”

On Thursday they were separated again, along with dozens of other Koreans who wept and exchanged final hugs. All knew that no Korean has gotten a second meeting.

“Please raise our son well and enlarge your mind,” Oh told his South Korean wife. He burst into tears while holding his wife’s hand. He wore a gold wrist watch that his wife had given him as a present this week.

The husband left first by boarding a bus with other North Korean participants. He stretched his arm out the bus window to grasp the hands of Lee, who smiled. Lee later touched the deeply wrinkled face of her husband.

Koreans on both sides of the border are barred from exchanging letters, phone calls and emails.