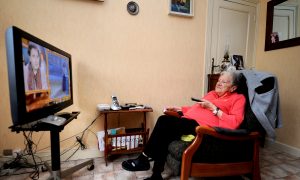 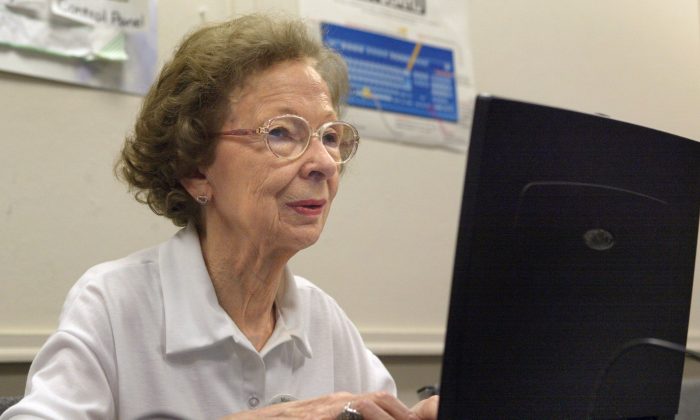 Suzette D'Hooghe, 77, works on her laptop during a computer class in Des Plaines, Illinois, July 23, 2003. A project led by a group of Ontario high school students is opening up a new world for seniors by teaching them basic computer skills. It is helping close not only the digital divide, but also the generational one. (Tim Boyle/Getty Images)
Canada

Anyone who has tried to call a grandparent over Skype for the first time knows that technology is not always intuitive for the older generation.

But a project led by a group of Ontario high school students is helping to change that by teaching seniors basic computer skills. It is a step toward closing the digital—and the generational—divide.

A few months ago a group of grade 12 students at St. Mildred’s-Lightbourn School in Oakville started tutoring local seniors on technology 101: how to use email, Skype, social media, and other basic Internet functions.

The program, led by the school’s Grads Giving Back committee, is helping seniors connect to loved ones online and giving them a new sense of independence, says teacher Sherida Scott, who helped launch the initiative.

“They want to connect to their families who they might not get to see a lot,” says Scott. “So what we’re seeing is that not only are they building their skills and learning how to use technology, but I think it’s been really enriching for them.”

We are learning how to connect and communicate to people of a different generation.
— Melissa Kodama, Grads Giving Back

Originally intended to be a temporary workshop for residents of Oakville’s Delmanor Glen Abbey Seniors’ home, the program has received so many requests from other local seniors that tutoring sessions have been expanded to meet the demand. Scott says some seniors are so eager to learn they have come to the school personally in order to seek out a tutor.

The response challenges the notion that seniors prefer to be bystanders in the digital age. According to Statistics Canada, the number of seniors using the web grew by 20 percent between 2010 and 2012, with 48 percent of Canadians 65 or older saying they went online in 2012. Figures are even higher in the U.S., with 59 percent of seniors online by 2012.

Many of the seniors in the Grads Giving Back program have never used a computer before, but with minimal training and time, the students are able to teach them enough to change their lives, says Scott.

“Just going over for an afternoon to help these seniors—it doesn’t take a lot to make a big difference in someone’s life,” she says.

“Once you learn a little bit about the Internet the whole world can open up for you.”

The grad program is also bridging the generation gap in some unexpected ways. Some of the students have formed lasting relationships with the seniors and regularly meet or chat on the phone. It seems the rare opportunity for the younger generation to teach their elders has opened a channel of dialogue as well as mutual respect.

“The seniors are gaining immense amounts of knowledge, but from the perspective of the teenagers, we are learning how to connect and communicate to people of a different generation,” said Melissa Kodama, co-events director of Grads Giving Back.

“Many of the teens most likely never have been to a senior’s home, or rather only gone to one to visit their grandparents, and so this was a new experience talking to people we wouldn’t normally make conversation with. I personally learned that the seniors are extremely interesting and knowledgeable… I learned a lot about their lives and their past, since they especially love to talk.”

The experience is similar to that in the film “Cyber Seniors,” a Toronto-shot documentary that inspired the Grads Giving Back program. Released last year, the critically acclaimed film chronicles the journey of a group of senior citizens as they discover the Internet through the guidance of teenage mentors.

The documentary sparked a movement across North America with the Connecting Generations campaign, which asks youth mentors to take the lead in bridging the technology gap and help seniors widen their social and physical environments.

This message has clearly resonated with Kodama, who will be mentoring another group of seniors with Grads Giving back this spring.

“Seniors are not up to date with our fast-paced technological world and not a lot is being done about it,” she says. “I wanted to help in a small way to minimize the gap between the seniors and us and bring the two very different worlds together.”