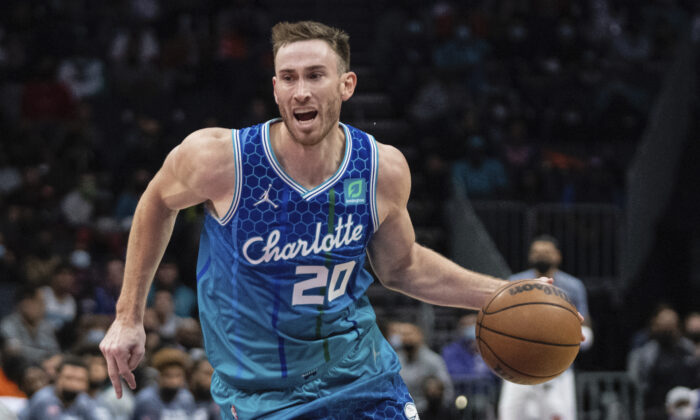 Charlotte Hornets forward Gordon Hayward (20) drives to the basket against the New York Knicks during the first half of an NBA basketball game in Charlotte, N.C., on Nov. 12, 2021. (Jacob Kupferman/AP Photo)
NBA

Gordon Hayward added 22 points and seven assists, and Terry Rozier chipped in with 18 points as the Hornets outscored the Knicks 34–21 in the third quarter for just their second win in the last seven games.

Kemba Walker broke out of his shooting slump against his former team, scoring 26 points on 9-of-19 shooting to lead the unpredictable Knicks, who have lost five of seven.

Hornets coach James Borrego said Bridges, who is averaging a team-leading 21.5 points per game, is coming into his own as a playmaker.

“Miles is a beautiful player in that he can make 3s off the bounce, catch-and-shoot, and can get to the rim,” Borrego said. “And when he gets to the rim it’s a problem, as you saw. He’s hard to stay in front of. … That’s the mentality I want him to have—to get downhill, get to the rim, and open up the court for us.”

After Bridges scored on a windmill dunk to match one by Obi Toppin’s on the previous possession, he used a nasty spin move in the lane to get past Julius Randle for an easy lay-in to push Charlotte’s lead to five with about two minutes to play. Bridges then took a pass from Ball at the top of the key and drove through the lane and scored on a finger roll, drawing a foul for a three-point play to help finish off the Knicks.

Bridges has used the spin move before in his career, but smiled and said, “I haven’t pulled it out in the clutch like that.”

Walker entered the game in a major slump, shooting 22.8 percent (8 of 35) from the field and 10.5 percent from 3-point range in his last four games while failing to reach double digits in any of them.

But the Hornets’ all-time leading scorer appeared ready to turn back the clock at the Spectrum Center after pouring in 17 points in the first quarter on four of five 3-pointers as the Knicks jumped to a 34–18 lead.

Borrego had different plans, as the Hornets switched out of their base defense after the first quarter.

“We tweaked it and brought our bigs up and didn’t let him get downhill,” Borrego said. “We showed two bodies and the weakside pulled in. We put size on him and I think that helped as well. … We just wanted to take out the pick and roll.”

For the Knicks, another second-half letdown ultimately proved to be their undoing.

“There’s no surprise into why you win or why you lose, to me it’s your defense,” coach Tom Thibodeau said. “Initially the defense was good and the rebounding was good, then the problem became our turnovers.”

Borrego said it helps when your 6-foot-6 point guard can grab 17 rebounds.

“That’s huge for us,” Borrego said of Ball, last year’s NBA Rookie of the Year. “When he rebounds at that level, it can really can ignite our fast break because he’s bringing it off the boards and starting our transition game.”

GOAT on the Bench

Six-time NBA champion and Hornets owner Michael Jordan sat on the end of the Charlotte bench in the first half, which Bridges admits can be a little intimidating.

“The greatest basketball player of all time on the bench supporting you definitely gives you nerves,” Bridges said. “I came out and missed a layup and some free throws early.”

Knicks: Burks had 15 points and nine rebounds off the bench. … The Hornets outscored New York 58–44 in the paint. … Shot 38.7 percent from the field.

Hornets: Hayward has scored at least 20 points in five of the last six games.