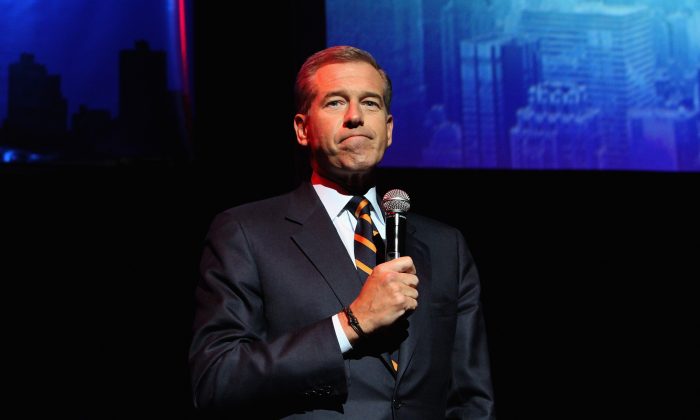 After being suspended without pay from NBC in February, Brian Williams returns to television this week. He won’t be heading back to the Nightly News desk (now anchored by Lester Holt), but he will be reporting breaking news updates on MSNBC, beginning with the pope’s visit to the United States.

Williams’ fall from grace at NBC came after he misrepresented, during a newscast, events that occurred while he was in Iraq in 2003. In a memo to staff announcing Williams’ suspension, president of NBC News Deborah Turness also expressed concerns about Williams’ misconstrued accounts of other events that had taken place while reporting in the field.

News reports indicate those concerns included Williams’ claim that he’d seen a body floating in the French Quarter in the aftermath of Hurricane Katrina, and even that Williams may have exaggerated rescuing puppies when he was a volunteer firefighter as a teenager.

The staff memo from Turness quoted Stephen B Burke, chief executive of NBC Universal, who said Williams’ actions were “inexcusable” and “jeopardized the trust millions of Americans place in NBC News.”

Of course, it would have been inexcusable if Williams had intentionally misled viewers about his reporting experiences to bolster his credibility.

But there’s also a body of research that suggests these recollections could be honest mistakes, made over time – that his memories of the events may have gradually melded together, becoming confused with other news reports he’d seen on TV.

After all, let’s not forget that Williams’ initial eyewitness accounts of his experiences in Iraq were accurate. A colleague and I studied embedded reporting during the Iraq War. We found that embedded reporters used more personal pronouns in their reporting than non-embeds did, but they did so in the context of factual eyewitness coverage, and rarely offered personal opinions. So Williams’ reporting style is precisely the type of reporting that ensures – rather than violates – reporter objectivity.

It was only years later that Williams incorrectly recalled being behind the plane that was shot by a rocket-propelled grenade (RPG), and not in another formation.

Even then, the gist of much of what Williams recalled was not fabricated: he was traveling with troops in Iraq in 2003 and there was a plane that took on enemy fire from an RPG. Undoubtedly, it was a terrifying and highly memorable event.

Though something that frightening should be recalled in vivid detail, sometimes those vivid details, despite their verisimilitude, are wrong. Numerous studies have shown that memory is fallible, that even recollection of highly emotional events can be distorted over time.

Studies of “flashbulb memories” – memories of highly emotional news events – show people’s recollections of how they learned of those events (such as what they were doing and with whom) are still quite detailed years later.

But they’re not always accurate.

One study looked at the flashbulb memories of how people learned of the Challenger explosion. The researchers found that those memories were often inaccurate years later. And when they were wrong, the original memory of how they found out about the explosion was often replaced by a memory of watching it on television.

The authors of that study did not explore this television link further, but as a media scholar I did in a study of flashbulb memories and the 9/11 terrorist attacks.

Unlike the Challenger study, I looked at memories of the event months, rather than years, after the terrorist attacks. I found no false memories, but participants did report viewing television almost immediately after learning about the event. And they continued watching for hours.

So is it any surprise that, after watching TV so soon after hearing of a horrific news event, people might, years later, falsely remember that they first learned about it while watching television? And that journalists who were on the ground might conflate TV reports with memories of their own experiences?

How much video did Brian Williams watch of the Katrina aftermath? His recollection of the floating body happened in 2006, a year after covering the event. That’s less time than the three-year study period of the Challenger flashbulb memory research, which did find that television intrudes into memories, but more than the three-month time period of my study, which did not.

It’s certainly possible that Williams’ recollection a year later confused what he’d witnessed firsthand and what he later viewed – most likely repeatedly – in recorded coverage of this highly emotional event.

Williams is smart enough to know it would be foolish to intentionally exaggerate his experiences, especially when there’s a record of his initial accounts to contradict them – and that he had a lot to lose if he did.

While NBC executives may insist this doesn’t excuse making incorrect statements from the anchor desk, it may at least explain why it happened.

Julia Fox, Associate Professor in the Media School , Indiana University, Bloomington. This article was originally published on The Conversation. Read the original article.