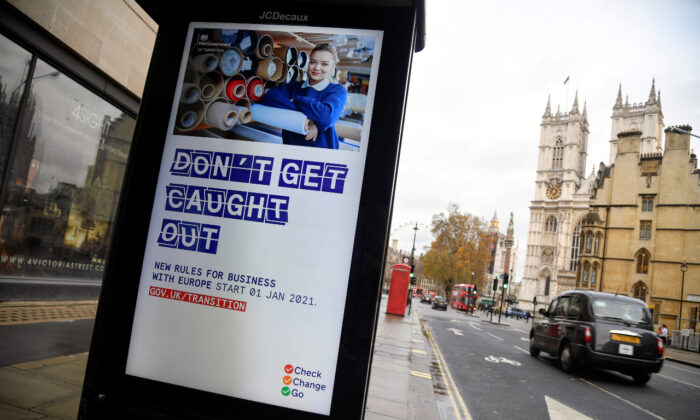 The UK government on Monday urged businesses to prepare for Brexit, just four days before the transition period designed to smooth the UK’s departure from the European Union comes to an end at 11 p.m. on Dec. 31.

Britain has stayed aligned to the EU’s trading and regulatory rules during the transition period, which has been in place since the country left the EU on Jan. 31 this year.

Following multiple talk breakdowns over recent months that faltered on fishing rights and fair competition rules, the two sides finally clinched an almost eleventh-hour trade deal on Thursday—one that preserves zero-tariff and zero-quota access to the bloc’s single market, but which will still cause disruption.

‘The Deal is Done’

“The deal is done,” cabinet office minister Michael Gove said in a statement, “but with big change comes challenge and opportunity.”

Businesses, he added, need to adjust to Britain’s departure from the EU Single Market and Customs Union.

“There are practical and procedural changes that businesses and citizens need to get ready for, and time to make these final preparations is very short,” he warned.

“Businesses will need to make sure they are ready for new customs procedures,” Gove told the BBC’s “Breakfast” programme.

“Those new requirements will mean that, in particular, when people arrive at the French border they do need to have the paperwork in order,” he said.

He said the government had worked to “make sure that businesses that are sending goods through Kent to Dover and on to Calais are in a position to be able to check to see if they’ve got the right paperwork.”

“If they haven’t, we would advise them absolutely not to make that journey, because they will only be turned back,” he added.

‘Time is Running Out’ campaign

Over recent months, and before the end of trade negotiations, Britain has been urging businesses to make preparations for the end of the transition period.

In October, the government announced its “Time is running out” campaign to tell businesses to urgently prepare for a no-deal Brexit, saying many of the changes they needed to make would apply regardless of the outcome of the talks.

At that time, Britain’s tax and customs authority, HMRC, was also writing to 200,000 businesses that trade with the EU, setting out the new customs and tax rules they will be governed by and advising on how to deal with them.

Businesses will need to make customs declarations on EU trade and understand the different rules that apply to trade with Northern Ireland, while hauliers need a permit to go to ports in the county of Kent or risk a fine.

Passports Up To Date

As well as businesses, Gove also warned citizens to prepare for the end of the Brexit transition.

“We as individuals will need to make sure our passports are up to date, because they need to have at least six months before expiry on them in order to travel abroad,” he said.

Other government advice for citizens planning to travel to the EU after 11 p.m. on Dec. 31 includes taking out comprehensive travel insurance, as for most travellers, the European Health Insurance Card (EHIC) will no longer be valid.

Charge-free roaming for mobile phone users travelling from Britain to EU countries will also stop after Dec. 31, including for employees of UK companies travelling in the EU for business.

MPs will vote on the over 1,000-page Brexit deal in Parliament on Wednesday, just one day before the UK is set to exit the EU.

Parliament is expected to pass the agreement, because the main opposition Labour Party has said it will support the deal.