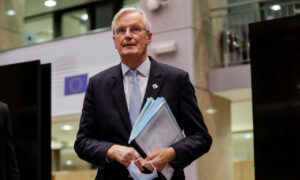 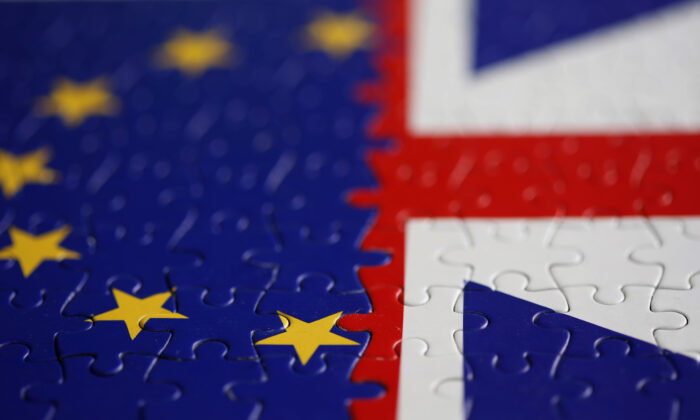 File photo shows a puzzle with printed EU and UK flags in this illustration taken on Nov. 13, 2019. (Dado Ruvic/Reuters/Illustration)
UK

The UK government’s proposed laws that would allow it to breach Britain’s EU exit treaty suffered a major defeat in Parliament on Monday.

The Internal Market Bill aims to smooth trading rules with devolved Northern Ireland, Scotland, and Wales after the transition period since the UK left the EU ends on Dec. 31.

Some of its clauses, however, undercut parts of the 2020 Brexit divorce deal and would break international law.

The House of Lords, where the government does not have a majority, voted to strip those clauses from the bill in a series of defeats for the ruling Conservative Party.

The bill has met with criticism from Northern Ireland and the EU because, if made law, it would allow the UK government to breach the Northern Ireland Protocol (pdf) that was already agreed under the Withdrawal Agreement.

Prime Minister Boris Johnson however says the clauses are a safety net in case ongoing negotiations with the EU fail to work out how goods can flow between Britain, Northern Ireland, and across the open border with EU member Ireland.

Many others meanwhile saw the bill as a negotiating gambit to win concessions from the EU in trade negotiations and Brussels has launched legal action against Britain over the proposals.

Even some high-profile Conservative members opposed the bill in the Lords.

Former Lord Chief Justice of England and Wales Igor Judge was against it because it would “undermine the rule of law and damage Britain’s reputation.”

This was echoed by Irish Foreign Minister Simon Coveney who wrote on Twitter that “Trust & Good Faith Matters.”

It’s for UK Parl to legislate as it sees fit.
But understand, if UK passes law designed to break International Law, WI & Protocol, then there will be no trade deal. EU cannot ratify a new deal while U.K. is legislating to break a previous agreement.
Trust & Good Faith Matters. https://t.co/OyS0Qw2csf

Coveney’s comments come while, with only weeks to go until the transition period ends, no Brexit deal has been reached between Britain and the EU.

“If UK passes law designed to break International Law … then there will be no trade deal,” he warned.

“EU cannot ratify a new deal while UK is legislating to break a previous agreement,” he added.

“The government should see sense, accept the removal of these offending clauses, and start to rebuild our international reputation,” she said.

Nevertheless, the government will be pressing ahead and re-tabling the controversial clauses of the bill when it returns to the House of Commons, according to a government spokesperson.

They said in an emailed statement that the government was “disappointed” the Lords had decided to remove clauses that keep a promise made in the 2019 Conservative manifesto and that had also passed through the Commons by 340 votes to 256.

“We’ve been consistently clear that the clauses represent a legal safety net to protect the integrity of the UK’s internal market and the huge gains of the peace process,” the spokesperson said.

“We expect the House of Lords to recognise that we have an obligation to the people of Northern Ireland to make sure they continue to have unfettered access to the UK under all circumstances,” they added.

Johnson’s 2019 election manifesto (pdf) promised to make sure that Northern Ireland’s businesses kept unrestricted access to the rest of the UK and that any Brexit deal would “maintain and strengthen the integrity and smooth operation” of the internal market.