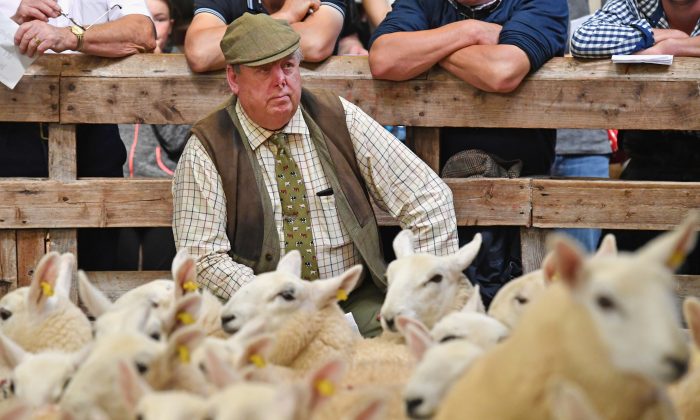 People watch as sheep farmers gather at Lairg auction for the great sale of lambs in Lairg, Scotland, on Aug. 16, 2016. Lairg market hosts the annual lamb sale, which is the biggest one day livestock market in Europe, when some twenty thousand sheep from all over the north of Scotland are bought and sold. (Jeff J Mitchell/Getty Images)
News

BIRMINGHAM, England—Brexit could reshape Britain’s iconic patchwork landscape, wiping out rural communities, if agriculture is used as a carelessly played bargaining chip in new trade deals, warn experts. If agriculture is handled correctly, however, some hope the deals will invigorate the countryside and rekindle the nation’s relationship with food and the land.

Like many sectors, bitter arguments for and against Brexit are being replaced by discussions on how to capitalize on the new reality as the nation heads for the negotiating table.

The relationship between humans and nature is cast deep into the British countryside, from undulating meadows shaped by the farming practices of the Middle Ages to ancient oaks in the remnants of Sherwood Forest.

With little space left, the coexistence of natural lands, farming, and regulations has long been negotiated. But whereas royal laws protected forests for the king’s deer and the country estates shaped the landscape, now European Union regulations and subsidies collide with fluctuating global market pressures and rapidly changing modern agricultural practices.

Some 80 percent of legislation currently affecting the British countryside is EU law.

Some 80 percent of legislation currently affecting the British countryside is EU law, and legislated subsidies make up half of many landowners’ incomes.

The U.K. government said it will copy and paste these into British law, replacing them with new legislation—and subsidies—as needed. Some groups, such as the National Union of Farmers, said this brings the biggest opportunity in 40 years to tailor legislation that was previously a one-size-fits-all rule for 28 member states.

The biggest worry for farmers is that trade deals could bring an influx of U.S. beef or New Zealand lamb. Such deals could force large-scale, mechanized agriculture onto Britain’s small farms, or even wipe out certain sectors.

A representative of the Welsh Union of Farmers said in an email: “In the worst-case scenarios, in marginal areas (which predominate in Wales and Scotland) Brexit could result in the collapse of rural economies, the loss of perhaps 80 percent of family farms, depopulation of rural areas, land abandonment, environmental damage.”

However, besides legislation and trade, the environment and food quality could also be protected by consumer demand for environmentally friendly and sustainable products, often referred to as the “green pound.” The coffee industry, for example, often exceeds quality and environmental requirements, he noted.

“Perhaps we could have a situation like in Ireland, where quality is a huge part of their produce,” said Williams.

Richard Bramley is an award-winning lowland farmer in South Yorkshire. He (narrowly) supported remaining in the EU but is positive about post-Brexit farming. He doesn’t believe the landscape will change much, or that bigger farms are the answer. He said it is the trade deals that really worry farmers who are already squeezed between regulations, conservation, and market forces.

He hopes that with Brexit, good, innovative farming practices will be better rewarded by the market.

But George Dunn of the Tenant Farmers Association said that without good regulation, profits will land elsewhere in the supply chain and not in the pockets of farmers.

Bramley and Dunn both say Brits need to understand that food is about more than finding the cheapest way to fill our stomachs, and farms are more than romantic rural icons. They believe Brits should be willing to pay for high-quality, healthy, local food. Bramley points out that the U.K. spends much less on food compared to other European nations.

The situation is highly complex. For example, trade deals might benefit farmers growing seasonal crops that rely on EU workers for harvesting. Trade deals might rip up certain standards the public supports, such as a ban on genetically modified foods and hormones. Rising on the agenda, too, is the issue of food security.

EU Parliament Votes in Favour of Trade Deal With Canada

What is good for wetland birds may be bad for farmers. What is good for farmers might be bad for the carefully preserved estate downstream. Whereas the jumbled needs of farming, conservation, and rural communities were held in a holding pattern before by EU legislation, the different parties are now starting to hash it out.

Conservation organizations are part of the rural establishment. Founded over a century ago, before “sustainability” or “environmentalism” entered the dictionary, the National Trust is one of the largest landowners and has the largest membership of any national organization.

Richard Hebditch, external affairs director of the National Trust, says the fortunes of all the different groups are tied together by the land itself, and that they need to figure it out together—a view shared by many of the stakeholders.

“The U.K. is a very crowded island. You can’t just set aside land for conservation,” said Hebditch.

“We are potentially going to have to face a choice of what we want from farmland and the natural environment, and it’s a choice we haven’t had to make since we joined the EU.”

Will Manley, a principal lecturer in agriculture at the Royal University of Agriculture said his personal view is that some farmers are simply indifferent towards Brexit.

Battle-weary from years of ever-tougher market conditions and battered by periodic changes in legislation from Brussels, many are simply resigned to another situation beyond their control. They will simply adapt as needed.

Dr Williams said that whilst lowland farms can adapt to different market forces, the upland sheep farms, already heavily subsidised, could not contend with an influx of cheap foreign lamb, or other trade scenarios.

The term “rewilding” however, isn’t necessarily helpful one, or even a useful concept, said some land management experts. “It’s not like Yellowstone Park,” said Dr Williams.

“Most of the land has been managed for centuries. It’s hard to know what a natural state would be for many places—you’d have to go back to the last ice age.”