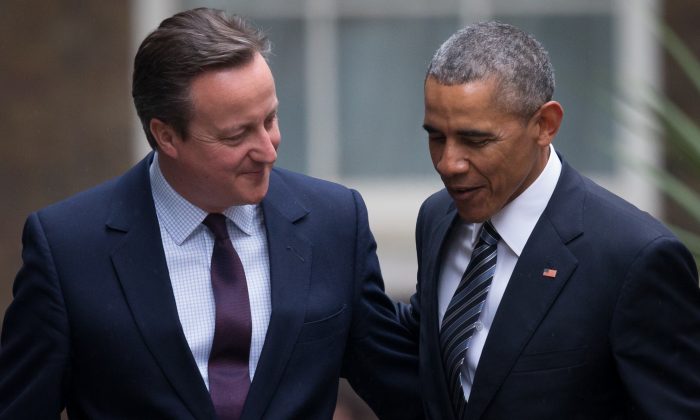 It’s not every day we get to see a country seemingly intent on committing political suicide. And yet, despite the pleas of concerned friends and independent evidence about its potential political and economic costs, it’s increasingly possible that Britain might do precisely that.

It is no secret that many Brits have been reluctant Europeans. They do things differently on “the continent,” after all, and not always with good results. It’s bad enough in peacetime, never mind during the many wars that have punctuated Europe’s frequently troubled history.

What is more remarkable in the British case is that Britain risks becoming the architect of its own demise.

The existence of the Channel no doubt helps to account for the sense of smug insularity that seems to affect so many in England when it comes to contemplating things European. The European Union’s biggest claim to fame—helping to pacify what was easily the bloodiest continent in the world—consequently cuts little ice.

Britain hasn’t suffered the ignominy and trauma of invasion at the hands of the neighbors for more than a thousand years. On the contrary, part of Britain’s contemporary national identity springs from the belief it has had to bail out the feckless, unreliable, and frequently mad Europeans on many occasions.

Britain is also the home of a rather robust form of liberalism that is highly skeptical about the merits of paternalistic, “interfering” states. Or they are in theory, at least. In reality, the state in Britain has grown just as it has elsewhere. More than 20 million families (64 percent of the total) rely on the welfare state for part of their income, and the British are weirdly proud of their National Health Service (NHS).

Such paradoxes have done little to undermine the familiar narrative about the perils of bossy bureaucrats in (chaotic and insecure) Brussels, however. Britain’s independently minded public bar philosophers—epitomized by UKIP’s Nigel Farage—don’t take kindly to these foreign Johnnies telling them what to do.

The possible benefits of membership of the EU are less clear and compelling than perhaps they might once have been. Explaining what’s at stake, let alone how membership of the EU actually benefits Britain, is a complex task that takes some economic literacy, a sense of history, and a dispassionate grasp of the “big picture.”

Unfortunately this is not likely to happen. Democratic politics is nearly always about the parochial and short term. In such circumstances, the temptations of political opportunism and self-interest are immense.

It is hard to believe that Boris Johnson, for example, really thinks that Britain as a whole will, in the longer term, actually be better off out than in. Johnson may act the clown, but he’s no fool.

Despite credible analyses from the Treasury—as near to an independent arbiter as the Brits are likely to get in the current circumstances—of the damage that will be done to the national economy and individual living standards, such evidence is unlikely to sway the leave camp.

Likewise, efforts by the likes of Barack Obama to point out how much Britain’s international standing will be damaged by its future isolation outside Europe are dismissed as “hypocritical” by Johnson, the most prominent and influential of the Brexiters.

Calling Obama a “part-Kenyan” with an enduring loathing for the British empire, Johnson claimed the United States defends its sovereignty in precisely the same way that he wants Britain to.

There’s one big problem with this argument: Britain is not America. It is already a rather middling power, despite the colossal amounts it spends on Trident in a vain attempt to maintain its importance. Outside of Europe’s all-important internal market and possibly without Scotland, England will be reduced to the geopolitical significance of Czech Republic.

In the long-term scheme of things, perhaps this is no great matter for the rest of the world. After all, the rise and fall of great powers and empires is the very stuff of history, and there is no reason to suppose that Britain is any more immune to such forces than any other country.

What is more remarkable in the British case is that, rather like the Soviet Union before it, Britain risks becoming the architect of its own demise.

Even if it’s not true to say that the British acquired their empire in a fit of absent-mindedness, as some claim, it does look as if they might oversee the end of Great Britain as a major power, and the possible dismemberment of Great Britain as a political entity, if the Scots take the opportunity to test the desire for independence once again.

The really awful thing about a British exit is the further damage it will inflict on an already beleaguered European project. This will be the last thing on many British minds. On the contrary, many in Britain will undoubtedly be experiencing the joys of at least one European sentiment: schadenfreude. It may be the last thing they get from Europe for a while.