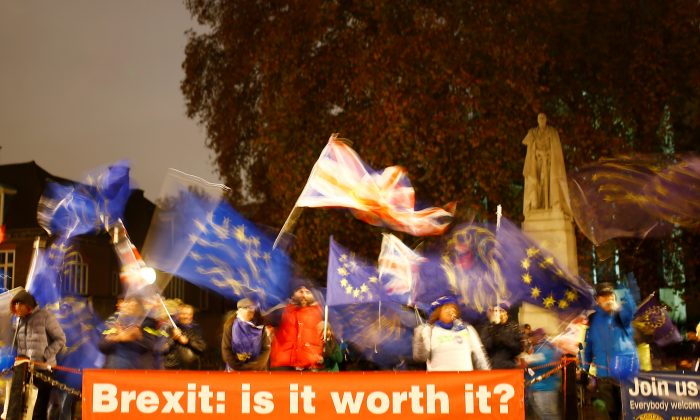 Anti-Brexit demonstrators protest outside the Houses of Parliament in London on Nov. 19, 2018. (Henry Nicholls/Reuters)
UK

LONDON—The UK’s Supreme Court has rejected a bid by the British government to stop the top court in Europe from hearing a case on whether the UK can reverse the Brexit process.

Politicians who are against Britain leaving the European Union would like the European Court of Justice (ECJ) to rule on whether the country can withdraw its notification to leave without permission from the other EU members.

The ECJ’s ruling would clarify whether the outcome of a second referendum, if it happens, would mean the UK could remain within the bloc.

The ECJ is due to hear the case on Nov. 27, but the British government appealed to the Supreme Court to block that from happening.

However, on Nov. 20, three of the UK’s top judges rejected the government’s application.

The government’s position was that lawmakers had no intention of reversing the decision to leave the EU, so it would make no difference if the ECJ ruled on it or not.

The anti-Brexit politicians are hoping the ECJ will decide that Britain can unilaterally decide to remain in the EU, even after Brexit negotiations are over.

It is unknown when the ECJ might make its ruling.

The notice to leave the EU was given under Article 50 of the EU treaty and was triggered March 29, 2017, by the UK following a very close-run referendum on June 23, 2016.

Britons voted 52 percent to 48 percent in favor of leaving the 27-member trading bloc in 2016, and have since negotiated to agree on the terms of separation before the UK leaves on March 29, 2019.

Last week, Britain’s Prime Minister Theresa May announced a withdrawal agreement had been reached with the EU, but many lawmakers have been unhappy with the terms of the deal. Several lawmakers resigned, including Brexit Secretary Dominic Raab who oversaw the negotiations.

He wrote in his resignation letter that the terms of the deal amounted to a hybrid of the EU customs union and single market.

“No democratic nation has ever signed up to be bound by such an extensive regime, imposed externally without any democratic control over the laws to be applied, nor the ability to decide to exit the arrangement,” he said.

“Above all, I cannot reconcile the terms of the proposed deal with the promises we made to the country in our manifesto at the last election.”

May has since aggressively defended the deal, saying that the UK has three options: backing her deal; leaving the EU in a disorderly “no deal” Brexit, which would be very disruptive for businesses and citizens; or reversing Brexit.

“I’m confident that this takes us significantly closer to delivering on what the British people voted for in the referendum,” May said when the deal was first announced.

“We will take back control of our borders, our laws, and our money, leave the Common Fisheries Policy and the Common Agricultural Policy, while protecting jobs, security, and the integrity of the United Kingdom.”

May has promised British lawmakers a vote on the deal, most likely in December. But with a wafer-thin majority in lawmaking chambers, and around 40 of her own party ready to vote against her, she may have to rely on rebel votes from the opposition Labour party, which is also split over Brexit.

If May’s deal is defeated, it could open the possibility of Britain leaving without a deal, or even of Brexit being postponed or not happening at all.