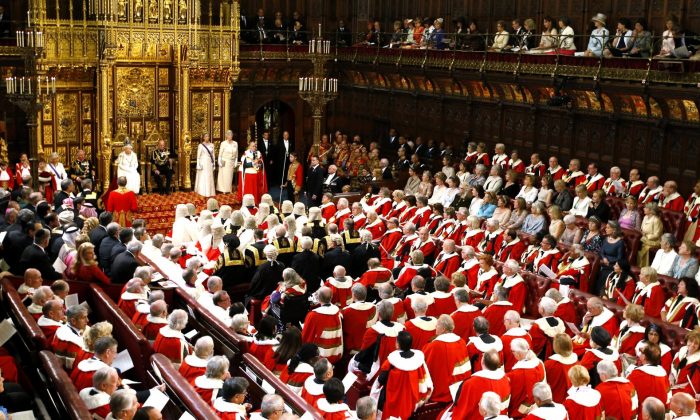 Queen Elizabeth II delivers a speech in the House of Lords in the Palace of Westminster during the opening of Parliament in London on May 27, 2015. (Alastair Grant/WPA Pool/Getty Images)
UK

Brexit: Out of the Political Frying Pan, Into the Constitutional Fire

The referendum vote may have been a simple yes or no, but Brexit is getting ever more complicated, dragging the United Kingdom into its biggest constitutional challenge in centuries and pitting unelected institutions against public ire.

In a landmark case, the U.K. Supreme Court this week held a hearing on whether the government needs to first hold a Parliament vote before it can trigger Article 50—the official process of leaving the European Union.

But regardless of the Supreme Court ruling, many other constitutional traps lie in wait, not least those concerning the unelected House of Lords, which could stymie Brexit’s progress and test the limits of the nation’s unwritten constitution.

Parliament has two chambers through which laws must pass. One is the House of Commons, comprised of elected members of Parliament. The other is the unelected House of Lords, 10 percent of whom are members by virtue of birthright, which has been periodically threatened with fundamental reform and long sneered at as an undemocratic anachronism.

If the Parliament gets a vote on Article 50, the House of Lords can delay Brexit by a year—potentially allowing political momentum to falter—said Andrew Henshaw, a barrister who has advised government and private clients on public law cases.

Even if the Supreme Court said the government can bypass a vote in Parliament, the House of Lords could still frustrate the passage of later legislation needed to enact Brexit.

If the public see what they think of as unelected aristocrats attempting to interfere with the process of finally prizing sovereignty back from the unelected technocrats of the EU, a head-on collision with the government could result.

The government might try to take away the Lords’ powers to delay legislation. “We would be in the same situation we were in back in 1911,” said Henshaw, referring to a constitutional showdown with the government that ultimately clipped the Lords to their current powers.

The Lords may not frustrate Brexit for political reasons but instead do so simply in the course of playing their traditional role of highlighting constitutional problems with legislation as experts in matters of law-making.

“It is less party-political than the Commons and indeed contains some 200 members who are non-political experts,” he said in an email.

Jo Murkens, an associate professor of law at the London School of Economics whose specializations include constitutional law, notes reform of the chamber is long overdue. He says it is sorely lacking in democratic credentials, but the Lords must nevertheless follow their traditional constitutional role.

House of Lords scrutiny of government plans is likely to reveal issues that have been glossed over [or] ill thought out.
— Jo Murkens, associate professor of law, London School of Economics

“House of Lords scrutiny of government plans is likely to reveal issues that have been glossed over, ill thought out, not anticipated, etc. Suddenly the government’s single-mindedness (Brexit means Brexit) could be thrown wide open, which would be politically embarrassing for the prime minister. And it could certainly delay her timetable,” said Murkens in an email.

A constitutional crisis could also be triggered if the Supreme Court rules that Wales, Scotland, and Northern Ireland each get a vote on Article 50. “The Scottish Parliament would refuse consent, on the basis that 62 percent of Scots voted to remain,” said Hazell. “That would trigger a head-on confrontation with Scotland and reopen the question of Scottish independence.”

Henshaw thinks the constitutional boundaries are being tested not because the constitution is uncodified or particularly inadequate, but simply because of the vast significance and complexity of Brexit itself.

Beyond the Supreme Court and the Lords, Brexit will continue to pressure and superheat politics and the constitution into an unpredictable plasma.

Catherine Barnard, professor of EU law at Cambridge University, said that the constitutional and political issues are tightly wed and highly complex.

Even if the government, the courts, and both houses of Parliament align perfectly, the process won’t be simple. British and EU law are “extraordinarily enmeshed,” said Barnard. “The process of unpicking them is absolutely vast.”

“We are in new constitutional waters. It is the biggest challenge facing the civil service in peacetime,” she said.