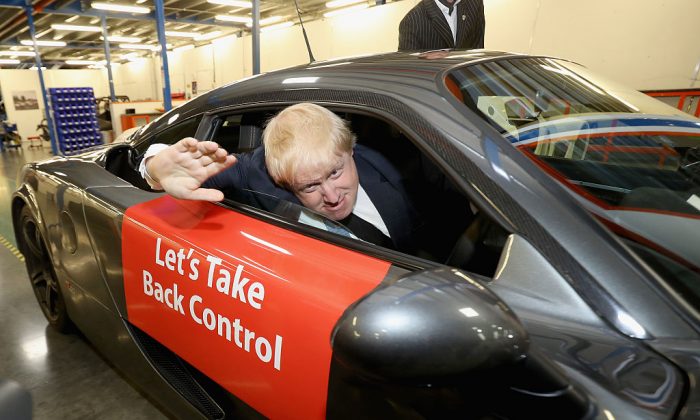 Prominent Brexit campaigner Boris Johnson drives a sports car during a Vote Leave event in Yorkshire on May 23, 2016, in Leeds, England. Some of his fellow campaigners for Vote Leave went on to become government ministers. (Christopher Furlong/Getty Images)
UK

The official Brexit campaign that pushed for the UK to leave the EU broke the law by breaching spending limits during the referendum two years ago.

An investigation by the Electoral Commission found that the official campaign for leaving the EU, Vote Leave, breached the spending cap by nearly half a million pounds.

The commission said it had referred its findings to the police.

During referendums, official campaigns are legally capped at 7 million pounds. Accounts for Vote Leave came in just under the cap, but the campaign failed to declare more than 675,000 pounds spent on a joint campaign with another organization, BeLeave.

That took Vote Leave’s total spending to 7,449,079 pounds, according to the commission.

Several ministers in the current government were members of the committee for the Vote Leave campaign, including Environment Secretary Michael Gove and Brexit Secretary Dominic Raab.

The commission said in a statement that it had referred David Halsall of Vote Leave and Darren Grimes of BeLeave to the Metropolitan Police in relation to false declarations of campaign spending.

Vote Leave representatives said that the commission’s investigation was motivated by a political agenda.

Grimes said that it was “incredible” that they had issued 20,000 pounds for having the “wrong box ticked on the application form.”

British electoral law allows for any number of unofficial referendum campaigns, provided that those spending more than 10,000 pounds register with the commission.

The Electoral Commission rules state that campaigners can work together, but spending on a joint campaign will count toward the limits for each campaigner involved.

Bob Posner, Electoral Commission legal counsel, said: “We found substantial evidence that the two groups worked to a common plan, did not declare their joint working, and did not adhere to the legal spending limits. These are serious breaches of the laws put in place by Parliament to ensure fairness and transparency at elections and referendums.”

The funds in question were paid to digital advertising company AggregateIQ.

In a quote since removed from the AggregateIQ website, according to the BBC, Vote Leave campaign Director Dominic Cummings said, “We couldn’t have done it without them.”

The commission statement said: “Evidence shows that BeLeave spent more than £675,000 with Aggregate IQ under a common plan with Vote Leave. This spending should have been declared by Vote Leave.

“Darren Grimes, the founder of the BeLeave campaign group, was found to have committed two offenses and has been fined £20,000. Mr. Grimes spent more than £675,000 on behalf of BeLeave, a non-registered campaigner that had a spending limit of £10,000. Further, he wrongly reported that same spending as his own.”

Grimes said in a statement that the Electoral Commission had been aware of this for over two years but had not raised the issue despite “extensive correspondence.”

But the commission said that Vote Leave has resisted the investigation from the get-go. “It has refused to cooperate, refused our requests to put forward a representative for interview, and forced us to use our legal powers to compel it to provide evidence,” said Posner.

Vote Leave said that it was confident the findings would be overturned, accusing the commission of being motivated by a political agenda.

“The Electoral Commission’s report contains a number of false accusations and incorrect assertions that are wholly inaccurate and do not stand up to scrutiny,” a Vote Leave spokesman said in a statement. “All this suggests that the supposedly impartial commission is motivated by a political agenda rather than uncovering the facts.”

An initial investigation into the Vote Leave campaign by the commission found no fault with the campaign, but it was then restarted after a critical review by campaigning group The Good Law Project.