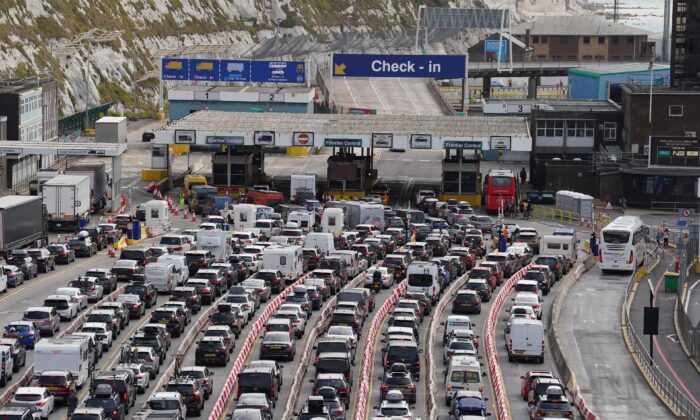 Downing Street has insisted the travel chaos in the English Channel is not the result of Brexit, blaming instead the shortage of French border control staff for causing long queues and delays.

The disruptions started at the Port of Dover on July 22, when thousands of holidaymakers were stuck in traffic jams and 6-hour queues. The situation improved in Dover on July 24, but congestion at the Eurotunnel terminal left more people stranded.

The Dover port authorities have blamed the French authorities for their “woefully inadequate” staffing for border control, but French officials have highlighted the extra border checks necessitated by Britain’s exit from the European Union.

In response, Prime Minister Boris Johnson’s official spokesman said on July 25: “We understand there are changes post-Brexit. We recognise that, we have planned for that.”

He said the weekend’s problems were down to a combination of factors “including a shortage of French border control staff.”

“So these are not scenes that we think are necessitated by leaving the European Union,” the spokesman said, adding: “We think we have operational procedures and processes in place that do not need to see these levels of queues.”

It followed a war of words between British and French officials over who is to blame for the weekend of travel chaos.

Truss insisted that the problems were down to insufficient border resources, rather than extra checks post-Brexit.

She said she had been “very clear” with French authorities that it is “a situation that has been caused by a lack of resource at the border.”

But French Transport Minister Clément Beaune hit back, saying that the French authorities were “mobilised to control our borders and facilitate the traffic as much as possible.”

“But France is not responsible for Brexit,” he wrote on Twitter.

Though the congestion has temporarily eased, the AA motoring group has warned drivers they could face a summer of repeat delays.

Toby Howe, senior highways manager at Kent County Council and tactical lead at Kent Resilience Forum, said it is “a very vulnerable situation” and “it takes very little to cause further issues.”

He told the BBC: “Traffic numbers travelling across the Channel were back to pre-pandemic levels and with the increased checks it is slower to get through, so it takes very little to cause those tailbacks.”