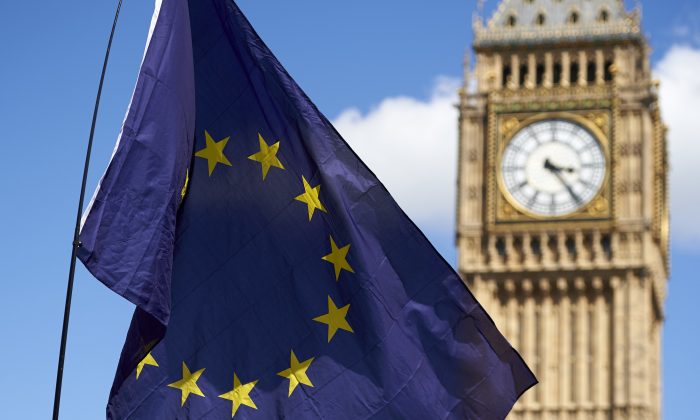 A European Union flag is flown in front of the Elizabeth Tower which houses the Big Ben bell in the Palace of Westminster in London, England, on July 2, 2016. (Niklas Halle'n/AFP/Getty Images)
UK

Representatives for the United Kingdom (U.K.) and the European Union (EU) kicked off Brexit negotiations in Brussels on June 19, almost 12 weeks after Britain’s prime minister triggered the mechanism that would let it depart from the EU.

Acknowledging the difficult talks ahead, British Secretary for Brexit David Davis, said the talks would be held in a constructive and positive atmosphere, and would deliver a deal “that works in the best interests of all citizens.”

Negotiator for the EU, Michel Barnier, said he hoped the initial talks would focus on a timeline for the negotiations and priorities for it. One priority he laid out was the border between Ireland and Northern Ireland.

Ireland has been part of the EU since 1973 and has had a free-flowing border with Northern Ireland since the Good Friday Agreement in 1998 that ended 30 years of sectarian violence in Northern Ireland, known as “The Troubles.”

EU citizens are allowed to travel between EU countries without a visa or limits to their stay. Now that Northern Ireland is leaving the EU, what will happen on the border between it and Ireland remains a question.

“We must first tackle the uncertainties caused by Brexit—first for citizens but also for the beneficiaries of the EU policies and for the impact on borders,” Barnier said.

In addition to the one-day talks, British Prime Minister Theresa May will be in Brussels later in the week for an EU Council summit. While Brexit is not on the agenda, she is expected to rub shoulders with other EU leaders, providing her opportunities to discuss the U.K.’s impending departure.

May is facing the EU with a depleted base after elections she called to be held three years early did not go in her favor. Instead of having a slim majority in Parliament, May’s Conservative Party lost 13 seats, and with it their majority power.

Additionally, she is facing pressure from hard-line “Brexiteers” within her party who want a hard break from the 27-nation bloc, as well as from those who want a softer Brexit deal that would keep some of the current conventions of the relationship in place.