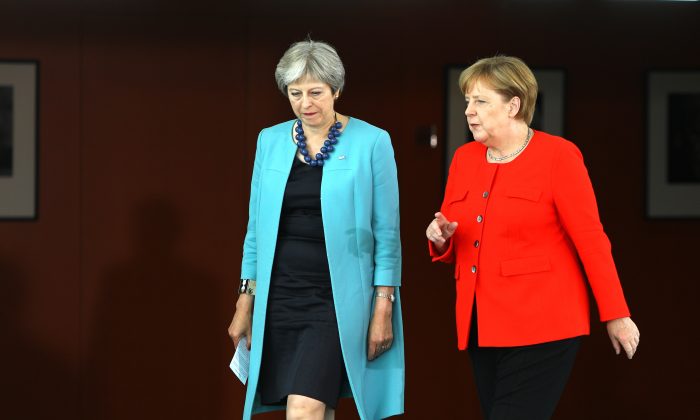 Brexit talks between the EU and UK will start again on July 16, after Prime Minister Theresa May finally published the long-awaited details of her blueprint for Brexit.

May’s 90-page, controversial “soft Brexit” plan is seen by some as conceding too much control to the EU and may be rejected by lawmakers in the UK.

The clock is ticking on the negotiations that must be completed in time for March 29, 2019—the day the UK leaves the EU.

On July 12, May revealed the full details of the plans she had outlined a week earlier.

Some hard-line Brexit lawmakers in her party said that they will not support the plans if it comes to a vote.

Some analysts said the EU may reject the plan, which proposes special customs arrangements under a “common rulebook” and allows some free movement of students and professionals.

Negotiations between the 27-member trading bloc and the UK had all but ground to a halt, with May unable to put down a negotiating hand due to long-standing splits within her own party.

May threw down the gauntlet to the hard-line Brexiteers in her Cabinet on July 6, finally rallying them together behind a plan for a “soft Brexit.”

The unity was short lived.

Johnson described May’s plans as a “semi-Brexit” that left the UK “locked in the EU system, but with no UK control over that system.”

The difficulty in the negotiations is that closer ties on trade and smoothing out customs processes (a frictionless border) means the adoption of certain EU regulations, rules, and laws.

Catherine Bernard, professor of EU law at Cambridge, said in a statement: “The prime minister’s foreword to the white paper opens with the mantra with which we are familiar: We will take back control of our money, laws, and borders. She also says that means ‘leaving the Single Market and the Customs Union, ending free movement and the jurisdiction of the European Court of Justice.

“But the devil is always in the detail. … She wants a ‘common rulebook’ for goods including agri-food, with the UK making an upfront choice to commit by treaty to ongoing harmonization with EU rules on goods.’ And that, the white paper acknowledges, may mean a role for the ECJ in interpreting those EU rules. And as for free movement: The signals are mixed.”

Brexit was a binary vote. But enacting Brexit first means negotiating a new relationship with the EU. That negotiation touches on many issues stirred up in the referendum vote: the jurisdiction of the EU courts, controls over immigration, and regulations over goods and trade.

Brexit consultant Ben Rogers from Whitehouse Consulting said, “While some on the UK side point to the Swiss deal as an example of a country being in the single market for goods only, it’s understood that the EU views that agreement as a major mistake.”

“Expect the EU to say no to the plans with a new set of proposals coming from Brussels,” he said in a statement.

Critics of the plan said it would leave the UK unable to strike a trade deal with the United States.

On July 13, U.S. President Donald Trump said he hoped, whatever route Brexit took, that the UK and the United States would be able to trade.

“It’s going to be independence; it’s just your definition. But if they’re going to go a certain route, I just said that I hope you’re going to be able to trade with the United States,” Trump said at a joint press conference with May in England.

“I read reports where that won’t be possible, but I believe after speaking to the prime minister’s people and representatives and trade experts that it absolutely will be possible.”

Trump described the Brexit negotiations with the EU as “very tough.”