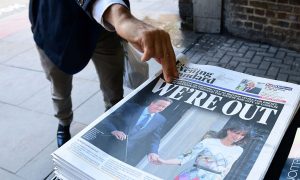 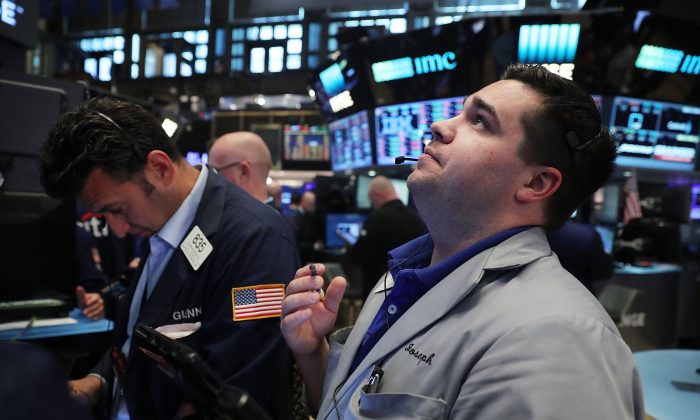 Traders work on the floor of the New York Stock Exchange (NYSE) following news that the United Kingdom has voted to leave the European Union on June 24. (Spencer Platt/Getty Images)
Business

Thank the Brits for bringing financial markets volatility not seen since the heydays of the financial crisis 2008. It’s important to remember that all of this movement is a knee-jerk reaction to what people perceive is going to happen after the UK leaves—because nobody really knows. So let’s have a look at what happened in the markets and why.

Let’s start with the British pound. The currency of the United Kingdom of Britain and Northern Ireland is like a price for the country. If it goes up, it means people are willing to pay more for it, if it goes down, people don’t think it’s worth that much.

So be sure, the pound dropped the most in a single day in history, down 11 percent against the dollar to $1.33 before recovering a bit. This is a huge move for one of the big boys in the currency markets and signals how nervous people are about owning British assets.

Sterling also went down against the euro (7 percent), the yen (16 percent), and all other currencies to differing degrees.

The move is most likely motivated by uncertainty rather than anything else. Traders are selling first and asking questions later, rather than trying to find an answer to how British assets will be impacted by leaving the European Union.

Most of the assets behind the pound sterling—the things traders actually own—are bank deposits and British Government bonds. So if you have 100,000 pounds stashed at Barclays, it won’t go away just because Britain left the European Union. And no, Barclays won’t go bankrupt, because the Bank of England and the British government can bail it out.

Also, Britain won’t go bankrupt, so British government bonds are still relatively safe, although the rating agencies said they may revise their outlook.

If anything, the drop in the British pound will help the economy, just like it did after Britain left the European exchange rate mechanism in 1992.

Here markets have more real reason to be worried. The British blue chip index FTSE 100 fell 8.7 in the beginning but closed only 3.15 percent down.

Some British companies doing a lot of business in Europe may be affected if there is no new free trade agreement. Some other companies may benefit from less free trade, however. Until it is clear what happens next in that regard, traders chose to take risk off the table.

U.S. markets are also down almost 3 percent in Friday trading mostly because of banks derivative exposure linking global markets together. In economic terms, U.S. multinationals doing business in Britain and Europe may also be negatively affected by more trade restrictions.

Global banks, which all use the City of London as a regional hub, were hit hard. European banks closed down 17 percent and British banks Royal Bank of Scotland and Barclays both lost 18 percent.

Part of the reason for banks being hit hardest is a self-fulfilling prophecy. Traders in the currency markets, who have the least reason to worry, sparked the volatility in currency derivatives, which hurts banks. Then banks’ stocks fall, creating more volatility in equity derivatives, spreading over to other equities and hurting banks even more.

In the medium term, there are real risks that the City of London will have problems retaining some of its foreign workers if freedom of movement of EU citizens is restricted. London banks will also be worried about competing in Europe when they leave the common market and common regulatory framework.

Gold was up 6 percent, rising above $1,300, the biggest jump since the failure of Lehman Brothers in 2008. Gold is outside the banking system and therefore provides a good insurance to volatility in currency and equity markets. Gold in pounds rose 15 percent, so everybody who bought into gold before the referendum can rejoice.

If stocks are sold, bonds are bid. They are relatively the safest asset within the banking and financial system and can absorb large amounts of capital but not with a change in price.

The 10-year UK Gilt yield fell to a record low of 1.02 percent, a decline of 35bp, which means investors bought the very asset backing the currency which declined more than 10 percent.

The German 10-year Bund yield hit a record low of minus 0.18 percent.

On the other side of the risk spectrum, yields of government bonds in the periphery of Europe rose sharply, led by a 35-basis point rise in Portugal’s 10-year yield to 3.4 percent. The reason: If the UK sets an example and more countries leave, the euro may fall apart. This means countries like Portugal and Greece will have their own local currencies again, which will most certainly devalue without the backing of Germany and other stronger nations.