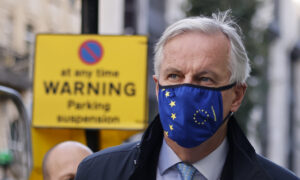 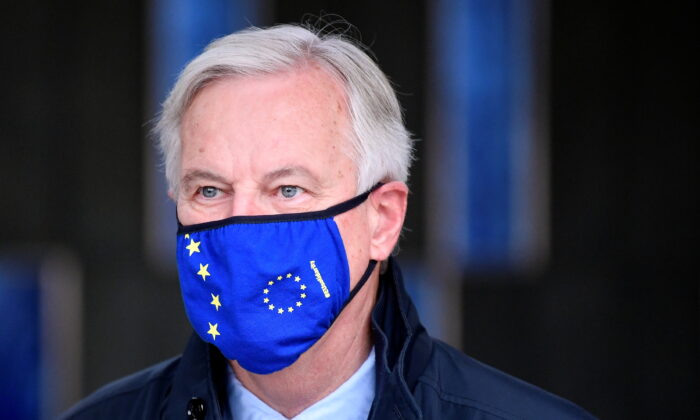 Brexit: Face-to-Face Talks to Resume as Barnier Heads to London

The chief EU trade negotiator is heading to London on Friday evening to resume face-to-face Brexit talks, after he was forced into quarantine last week by a positive COVID-19 test in his team.

With just five weeks now left before the UK leaves the trading block—with or without a deal—negotiations between EU negotiator Michel Barnier and his UK counterpart David Frost were forced online this week.

Barnier on Friday said that significant differences still remain between the EU and UK on the issue of fisheries, state aid, and future dispute resolution.

He said that after briefing member states and the European Parliament on the state of negotiations today, he will travel to London to resume talks.

“In line with Belgian rules, my team and I are no longer in quarantine,” Barnier wrote on Twitter. “Physical negotiations can continue.”

Barnier, however, said that the “same significant divergences persist” on the talks.

The UK officially pulled out of the trading bloc last January but entered a transition period in which trading arrangements—such as tariffs and quotas—remained unaltered. That transition ends at midnight on Dec. 31.

The head of the EU Commission, Ursula von der Leyen, said that there had been progress on important questions.

“However, there are still three issues that can make the difference between a deal and no-deal,” she said on Nov. 25 in a speech to the commission.

“The European Union is well prepared for a no-deal scenario but of course we prefer to have an agreement,” she said. “One thing is clear: whatever the outcome, there has to be and there will be a clear difference between being a full member of the EU and just being a valued partner.”

In addition to the largely symbolic issue of fishing rights are two other issues: an economic “level playing field” between companies without either bloc being able to put their finger on the scales; and agreeing on how to settle trade disputes.

Prime Minister Boris Johnson has stuck to his mantra that the UK can prosper if no deal is struck.