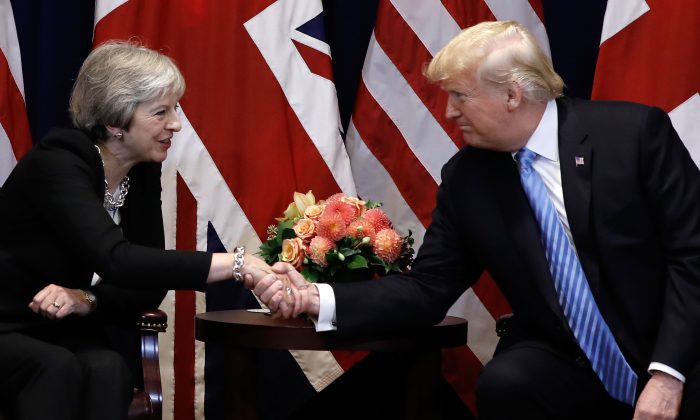 The withdrawal agreement “sounds like a great deal for the EU” but may not allow Britain to negotiate a free trade agreement with the United States, Trump told reporters on Nov. 26.

“We have to take a look at, seriously, whether or not the UK is allowed to trade,” Trump said.

May responded to Trump’s criticisms on Nov. 27, insisting that the Brexit deal “clearly identifies” that the UK will have an independent trade policy. Speaking to the public in Wales, May said that Britain would be free to strike trade deals with countries around the world.

“As regards the United States, we have already been talking to them about the sort of agreement that we could have in the future,” she said. “We have a working group set up and that is working very well, has met several times and is continuing to work with the U.S. on this.”

The United States is the single largest source of inward investment into the UK. Both countries invested more than $1.2 trillion in each other’s economies, according to the Office of the U.S. Trade Representative (USTR). And the trade between the two countries is valued at over $230 billion a year.

The United States is the largest export market for British goods. UK exports to the United States are valued at nearly 100 billion pounds a year, more than twice that of Germany, its second-biggest market.

According to an article by The Guardian, Trump is indeed right, as the current Brexit deal has “significant obstacles” to the UK’s trade liberalization.

The withdrawal agreement expects a 21-month transition period, during which Britain will continue to be part of the single market and customs union without any decision-making representation in Brussels. The UK would continue to be subject to the EU’s trade policies, tariffs, and standards during the transition period, which could be extended for two more years if the Brexit deal hasn’t been ratified by July 2020.

Moreover, the UK’s customs relationship with the EU won’t be clear until late in the transition period, the Guardian reported, which will make groundwork for a U.S.–UK trade deal difficult to do.

British trade minister Liam Fox claimed earlier that when the EU barriers to trade such as tariffs and standards are removed, U.S.–UK trade could rise by 40 billion pounds ($51 billion) a year by 2030. In terms of standards, Fox hinted there would be general relaxation of rules on U.S. goods.

According to a recent report by the USTR, many products that conform to international standards can’t meet the stricter EU standards. Hence, these create challenges for U.S. exporters in accessing European markets.

Speaking at the Hudson Institute event on Nov. 26, Darroch said that the UK would be able to run two negotiations in parallel, one with Brussels and another with Washington.

The UK’s objective is to keep the trade with the EU as frictionless as possible while gaining the freedom to do the kind of deal they want to do with the United States, he said.

Darroch also said there wouldn’t be a formal bilateral meeting between May and Trump on the margins of the Group of 20 (G-20) summit in Argentina this week, even as they will be sitting next to one another in the plenary sessions, according to the seating plan.

“So they will have plenty of opportunities to talk. I am sure they will talk about Brexit,” he said.

May will be watched closely during the summit in Buenos Aires as she faces leadership challenges in her country over Brexit.

After 20 months of negotiations, EU leaders approved the UK’s 585-page withdrawal agreement on Nov. 25. The deal now needs to be approved by the UK Parliament. May, however, faces intense opposition from both the Labor Party and her fellow Conservatives who threaten to veto the treaty.

Brussels has warned that the UK won’t be able to get better terms if the British Parliament votes against the deal.

Global markets are affected by the Brexit events, said Heather Conley, senior vice president and director of the Europe program at the Center for Strategic International Studies.

“The potential for failure for the House of Commons to pass the withdrawal agreement is certainly one of those shocks,” she said. No deal on March 29, 2019, would be very impactful, she added.