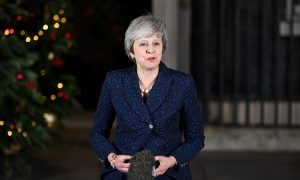 LONDON—British lawmakers have rejected the Brexit divorce deal hammered out between the European Union and Prime Minister Theresa May in the biggest defeat of a sitting government in United Kingdom history.

The vote on Jan. 15 throws the Brexit process once again into disarray, paradoxically increasing the likelihood of both the most hardcore Brexit—leaving without a bespoke agreement—and of no Brexit at all.

Members of parliament voted by 432 votes to 202 to reject the deal, just 73 days before the UK is due to leave the EU, with over 118 Conservative party lawmakers rebelling against May.

The opposition Labour party leader, Jeremy Corbyn, has tabled a vote of no confidence in the government, expected to be carried out the next day, on Jan. 16. If passed, that motion could in theory trigger a general election within weeks.

When they voted 52–48 to leave the EU in June 2016, the British people sparked divorce talks but left the UK wedded to the EU while the terms of the settlement were negotiated. That divorce settlement was wrapped up in November but needs the approval of the British parliament, which is deeply divided over Brexit.

Many Brexit-supporting lawmakers can’t stomach the terms that guarantee there is no hard border between Ireland and Northern Ireland—the final sticking point in negotiations. They claim it will make the UK a “vassal state” of the EU.

Former foreign secretary and leading Brexit supporter Boris Johnson said that meant May’s deal was now “dead.” But he told the BBC that it gave the prime minister a “massive mandate to go back to Brussels” to negotiate a better deal, without that backstop.

The vote, however, also leaves the door open to a second referendum—increasingly seen as a solution for the deadlocked parliament—and for the UK to remain in the EU.

Normally, such a crushing parliamentary defeat would be followed by the resignation of the prime minister. But the norms of British politics were thrown out of the window after the Brexit vote in 2016, and May’s announcement that she would carry on surprised few political commentators.

“The House has spoken and this government will listen,” she told MPs.

May now has three days to put an alternative to lawmakers, which could include an agreement to renegotiate.

In theory, current legislation means the UK is on a single-line track out of the EU, and is due to pass the point of no return on March 29 when it breaks the treaty ties binding it to the EU. If no deal with the EU has been agreed at that point, then the UK still leaves, but on World Trade Organization terms—a no-deal Brexit.

But some lawmakers are desperately trying to figure out how to fit the Brexit legislation with brakes and a reverse gear through various parliamentary procedures. The government itself may try to extend the period of negotiation and push back the current March 29 deadline to avoid the no-deal scenario.

A no-deal Brexit is widely seen as the worst-case economic scenario and has spooked markets in recent months.

Polls suggest public appetite for Brexit has dulled since the referendum in June 2016.  A long-running Eurotrack poll that showed Leave and Remain votes neck and neck at the moment of the referendum now puts Remain four points ahead, as of press time.