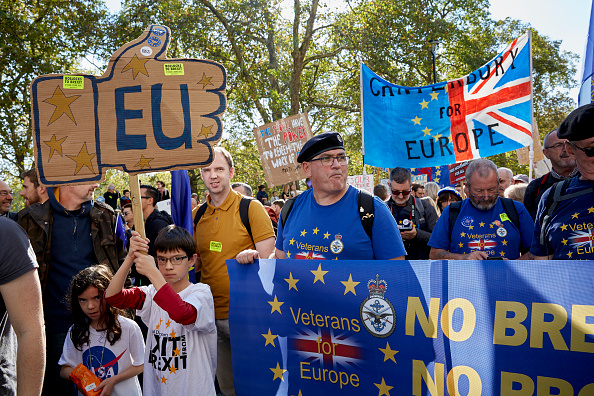 The European Central Bank’s prospects for gradually weaning the economy off monetary support could yet be tested by a big unknown its officials don’t mention much: a disorderly Brexit.

Policy makers have given limited prominence to that risk despite divorce talks between the U.K. and European Union repeatedly stalling before the country’s departure in less than six months. In the economic analysis ECB President Mario Draghi reads out at every decision, it was last specifically cited in 2016, and his Executive Board colleagues haven’t referred to it often this year.

That reticence may be getting harder to sustain as the political standoff stokes increased speculation over the region’s outlook. The next chance for policymakers to address it is at their meeting on Oct. 24-25, when they’ll review their plan to conclude bond purchases this year and set up a possible rate hike in late 2019.

“Brexit is the big elephant in the room for the euro area’s economy,” said Karsten Junius, chief economist at Bank J Safra Sarasin in Zurich. “A lot of people are trying to guess the nitty-gritty of interest-rate increases that are still about a year out, but are ignoring one of the region’s key economic risks.”

When Draghi has spoken on the topic, he’s tended to play down the economic risks. Questioned by EU lawmakers in September on the implications of a no-deal Brexit, he said ECB estimates show the impact “should be, in the aggregate, quite muted.”

In a statement for the International Monetary Fund meeting in Bali this month, he said a disorderly outcome could pose a “significant downside risk” to financial stability but the overall risk should be limited. He told EU leaders at a summit two weeks ago in Brussels—where Brexit talks again failed to achieve a breakthrough—that the direct effects would be limited for the euro area, though some countries are more exposed.

“We estimate that crashing out of the EU could cost Britain almost 5 percent of annual GDP by 2030, through reduced openness. For the euro area, the impact would be far smaller—trade patterns suggest it could be a fifth of that, maybe less,” said Jamie Murray,  of Bloomberg Economics.

Also in Bali, Executive Board member Yves Mersch cited Brexit as a risk to growth. But at the same time, Dutch central-bank president Klaas Knot said in an interview that officials would be well advised to wait and see how a range of external threats to the economy play out.

“They are downside risks, but they might not materialize, or materialize to a lesser extent than we thought,” he said.

ECB officials will have a chance to say more on the topic next month when the institution publishes its semi-annual Financial Stability Review.

The central bank has good reason to shun the matter as long as possible though. It may wish to avoid raising the alarm over a hypothetical worst-case scenario that could even incite public debate, and it has no say in negotiations.

Neither Vice President Luis de Guindos nor chief economist Peter Praet referred to Brexit in speeches last week, and policy makers are now in a blackout period before the Oct. 25 meeting.

One euro-zone central bank official—speaking on condition of anonymity—said a failure to reach a Brexit deal could necessitate a downward revision of ECB forecasts and possibly slow the process of normalizing monetary policy. The ECB declined to comment.

Any dilemma for the ECB on the matter is still nothing compared with the Bank of England, which must brace for any U.K. impact and until now has based its forecasts on the assumption that Brexit will be followed by a smooth transition.

“Brexit is very much an isolated factor,” said Samuel Tombs, an economist at Pantheon Macroeconomics in London. “Clearly a ‘no deal’ would hurt the German and French economies as well, but I don’t think that’s very likely to overwhelm the pain felt in the U.K.”

Draghi will reveal the latest ECB view on economic risks at a press conference after Governing Council meeting. The Financial Stability Review will be in mid-November and the final rate decision of the year, featuring new quarterly economic forecasts, will be in December—little more than three months before the U.K. exit date of March 29.

“Deadlines are approaching, the rhetoric is turning a little bit more negative,” said Dean Turner, an economist at UBS Wealth Management, looking ahead to this week’s decision. “I wouldn’t be surprised if they flag risk around Brexit.”