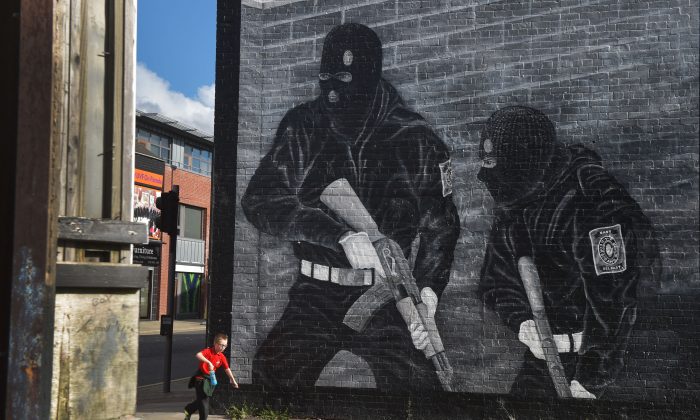 LONDON—Brexit could “re-ignite” the sectarian conflict in Northern Ireland, two decades after the end of The Troubles that left more than 3,000 people dead, according to a new report.

Key to those concerns is what will happen to the border between the Northern Ireland (a province of the UK) and Ireland after Brexit.

The UK is in the final stages of negotiations with the EU that will determine customs and immigration arrangements with the EU. That potentially means new, much harder, border controls.

But the UK’s only land border with the EU will lie between Northern Ireland and Ireland—a border that was once a flash-point in sectarian violence, targeted by Republicans as a hated embodiment of what they saw as British occupation.

After a peace deal was struck in 1998, border controls have all but disappeared, with customs and immigration handled seamlessly under common EU rules.

The report from BrexitLawNI, a partnership of academics and human rights experts from the Committee on the Administration of Justice (CAJ), warned of the dangers of the recreation of a “hard border.”

Researchers interviewed dissidents over 18 months on both sides of the conflict.

“Brexit was manna from heaven from our perspective,” the leader of a dissident Republican group told researchers. According to the report, there was a “widespread consensus” among Republican dissidents that a hard border would become a “mobilizing agent” for “violence and protest.”

‘A New Bone of Contention ‘

The question of how to handle the border is a key sticking point in Brexit negotiations. The UK government has promised to avoid a hard border, but it isn’t clear yet what the mechanism would be.

“There is a real danger Brexit could re-ignite conflict here,” said Brian Gormally, director of the CAJ.

“As the leaving process lurches ever nearer to a ‘hard’ or ‘no-deal Brexit’ there is a risk of nationalists becoming more and more disillusioned at the disregarding of the will of the majority here, while unionists coalesce in defense of Brexit and the border,” he said in a statement.

“The last thing we need is a new bone of contention between our people,” said Gormally.

The Good Friday Agreement in 1998 set up a “power-sharing agreement” between political wings of both sides, to govern the province which has a certain level of autonomy.

However, the power-sharing government collapsed in Nov. 2016, with the executive now being run by civil servants, with a budget set by central government in London.

The period of violence known as The Troubles started toward the end of the 1960s.

But the majority of the 3,000 deaths occurred in Northern Ireland itself, with sectarian attacks from both sides.

The terrorist threat from dissidents has plummeted over the last two decades, but is still one of the main terror threats facing the UK, after Islamic extremism.

The terrorist threat in Northern Ireland has been at the second highest level—severe— since MI5 introduced the system in 2010. Six people were killed by dissident Republicans between 2009 and 2017.