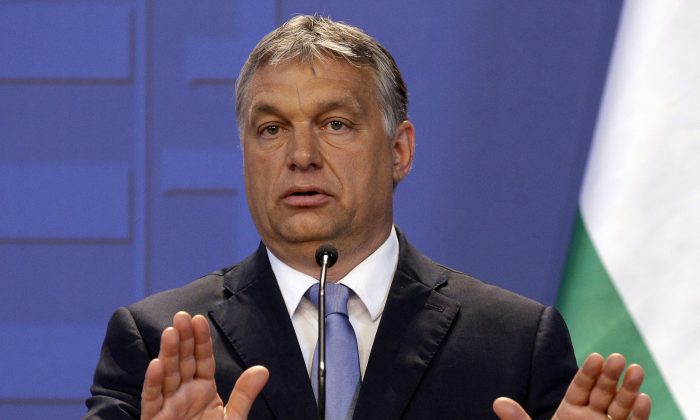 Hungarian Prime Minister Viktor Orban at a joint press conference with the Austrian chancellor in the Delegation Hall of the parliament building in Budapest on July 26, 2016. (Peter Kohalmi/AFP/Getty Images)
Opinion

PIRAN, Slovenia—Anti-immigration leaders may applaud the victory in Britain favoring exit from the European Union, but many in Central Europe will regret a weakening European Union. Despite dislike for some EU policies, leaders in Hungary, Poland, and Czech Republic remain too dependent on the union to wish for its demise.

Hungary’s right-wing firebrand prime minister, Viktor Orban, wasted no time after Britain voted to leave the European Union to crow vindication for his anti-migrant stance and blame a “disorderly” EU for the Brexit result. Days later, his chief of staff said that were Hungary to hold its own plebiscite on EU membership he would vote to leave. Across Central Europe’s former communist EU newcomer states of Hungary, Poland, Czech Republic, and Slovakia, where far-right sentiment is surging, leaders followed Orban’s lead to bash the EU. Slovakia’s conservative premier Robert Fico blasted EU migrant policy, calling for “fundamental changes,” and Poland’s Jaroslaw Kaczynski, head of the ruling Law and Justice Party, urged a new European treaty because “federalist concepts lead to unhappiness.”

To hear the rhetoric, one might assume that “Huxit” or “Czexit”—departures by Hungary or the Czech Republic—may be around the corner. Don’t be fooled. Central Europe’s Visegrad group countries—named after the 1991 alliance forged in the Hungarian town of the same name—are deeply attached to the EU, if not exactly europhile then euro-dependent. This is among the reasons why these nations are in mourning over Brexit. By weakening the EU, the British referendum poses a direct threat to the economic efflorescence that, thanks to the scorned EU itself, has allowed them to outperform the rest of the bloc. Poland’s economy grew by 3.5 percent last year; Hungary’s by 2.9 percent, although it shrank unexpectedly in the first quarter of this year; the Czech Republic’s expanded by 4.3 percent; Slovakia’s by 3.6 percent. Overall, the EU grew 1.9 percent in 2015.

One might assume that ‘Huxit’ or ‘Czexit’ departures are just around the corner. Don’t be fooled.

Orban and Kaczynski may sound like French far-right leader Marine Le Pen and Dutch ultranationalist Geert Wilders, but they do not want to demolish the EU. Circumstances, if not conviction, put them at least for now on opposite sides of history regarding the most pressing question their peoples face: the future of Europe. Le Pen and Wilders could not be more jubilant by Brexit—in it, they see hope for their dream of dismantling Europe’s union. For Orban and the other Visegrad leaders, Brexit is a calamity with deep negative implications for their economies, political aspirations, strategic and diplomatic priorities, and their demographics and labor markets. Before the Brexit referendum, Hungary took out a full-page advertisement in Britain’s Daily Mail, signed by Orban: “Hungary is proud to stand with you as a member of the European Union.”

The European project in general—and Britain’s role in particular—has been crucial to the Central European success story, a tale drowned out by headlines on Orban’s latest Muslim-bashing rants. The biggest economic benefit for EU newcomers, which joined in the 2004 wave of expansion, has been access to the European common market: Fellow EU countries buy about 80 percent of exports from Central Europe. Free movement of workers in the EU—especially to Britain—boosted their economies, easing unemployment pressures and providing remittances. Poles living in Britain send home 1 billion euros ($1.12 billion) every year. True, Central Europe has suffered brain drain, but a more significant long-term factor is that when young workers leave for richer, more sophisticated economies many often return with top-class skills to help fuel growth and innovation—a brain re-gain.

EU structural and cohesion funds account for a big chunk of these countries’ GDP: Hungary is allocated 34 billion euros ($37.9 billion) for the 2014–2020 funding period and Poland, the largest net recipient, 115 billion euros ($128 billion). The departure of Britain, which last year contributed about 8.5 percent of the EU budget, after application of its rebate, means smaller cash inflows. The economic benefits are reflected in post-Brexit polls that show strong majorities in the grouping’s countries preferring to remain in the EU, notably 64 percent in Hungary and 70 percent in Poland.

The attraction has gone both ways. Foreign investment is surging into the Visegrad group countries. And isolationist talk from Orban and Kaczynski belies the fact that all countries of the group have by and large created reasonably benign environments for EU investors, despite some hostile policies such as “crisis taxes” on foreign banks and utilities that grabbed most headlines. Backstage, Hungarian policymakers have nurtured business-friendly programs, building a liberal market culture, robust legal frameworks for investors, and a streamlined web-based bureaucracy—as Orban struts before the cameras. The country also developed sophisticated financial and manufacturing sectors, a lure for foreign direct investment.

So when one talks about Hungary and other Visegrad countries being “euroskeptic,” an understanding is required. In this case the term does not mean, in the mold of Nigel Farage, who led Britain’s Leave campaign, being against the EU. It means being opposed to perceived excessive interference on domestic policy from Brussels and a sense of being treated like a child at a table of grownups by founding member states.

And this is another reason why Brexit is bad for Central Europe’s young EU members: Britain was the Visegrad group’s main ally in pushing precisely this line on interference and using its clout to argue for an EU in which no member is sidelined by Brussels decision-making. The irony is that a stronger EU with Britain inside has been Hungary’s and Poland’s best hope for achieving a weaker EU of limited powers.

Brexit is a blow to Poland and others because London shared their Atlanticist vision of security.

At a strategic level, Brexit is a deep blow to Poland, Czech Republic, and Slovakia because London shared their Atlanticist vision as a guarantor of security in the face of an increasingly aggressive and volatile Russia. Germany, dependent on Russian energy supplies, has an interest in maintaining a more accommodating approach to Vladimir Putin, whereas Britain has backed Poland’s calls for continued sanctions against Russia and stationing NATO troops in Central European countries that border Russia. Meanwhile, Orban does not share Poland’s gut-felt antagonism to Russia, playing a Machiavellian game of courting both Putin and the West.

There’s a last trenchant irony to ponder in Central Europe’s response to Brexit. Orban’s declaration that Britain voted to leave because of the EU’s failed migration policies was sleight-of-hand. The migrants that Farage and his cohorts fume about are not really Syrians, but Hungarians and Poles. Brexit held sway not chiefly due to Farage’s grandiose defiance to a higher power in Brussels, but because millions in Britain’s northern industrial rust-belt felt that eastern and central Europeans were stealing jobs. And this is a final reason why Central Europe is experiencing Brexit blues, despite their anti-EU venting. One of Poland’s first reactions to the referendum was to declare it would work to protect the interests of the 800,000 Poles living in Britain—the country’s second-largest immigrant group. Both Orban and Kaczynski predictably said there should be no rush to open Britain’s exit negotiations—putting them at odds with many EU leaders who push for a quick, even punitive, divorce. Kaczynski even echoed calls in Britain’s Remain camp for a second referendum—and lashed out against a tide of anti-British venom flowing from the EU leadership elite, condemning a “hysterical response,” perhaps startling for a leader on the record as warning that migrants carry dangerous “parasites.”

Much of the uncharacteristic go-slow caution may be down simply to fear: Kaczynski and other Visegrad leaders are in no hurry to see Britain leave because that could mean millions of workers from their countries returning home—a recipe for stagnation.

Joji Sakurai is a journalist and essayist based in Piran, Slovenia. Copyright © 2016 YaleGlobal and the MacMillan Center. This article was originally published on YaleGlobal Online.