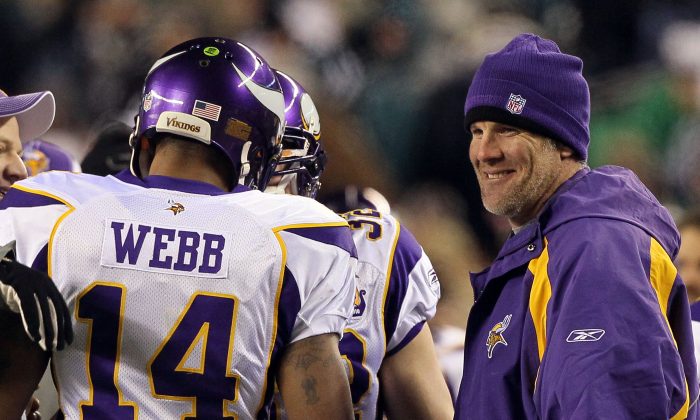 Quarterback Brett Favre (R) #4 congratulates Joe Webb #14 of the Minnesota Vikings after scoring a touchdown in 2010. Favre should be brought back to the Packers, and his jersey should be retired, says the Packers CEO. (Jim McIsaac/Getty Images)
Sports

Brett Favre Packers: Green Bay Packers President and CEO Mark Murphy told Fox Sports Wisconsin that the Packers want to have Favre “back in the family.”

Favre, after leading the Packers for 15 seasons, retired in 2008, but then announced he wanted to start playing again. But the Packers had Aaron Rodgers in the starting slot by then, so Favre was forced to go to other teams. There was some ill will between Rodgers and Favre.

That ill will is shifting after the two were on stage together during the NFL Honors show.

“I thought he and Aaron jointly presenting the Comeback Player of the Year Award was a great first step,” Murphy said. “We’re hopeful to have [Favre] back in the fold and get him back involved in the organization soon.”

“I thought it was good timing to just let the fans know, to let Brett know, let’s move forward,” Rodgers said on his Wisconsin radio show in February, according to Fox Sports Wisconsin. “Let’s heal things up and move forward.”

Involved in bringing Favre back is retiring his No. 4 jersey.

“It’s got to be the right time for him and us,” Murphy said. “That [retiring Favre’s jersey soon] will happen.”