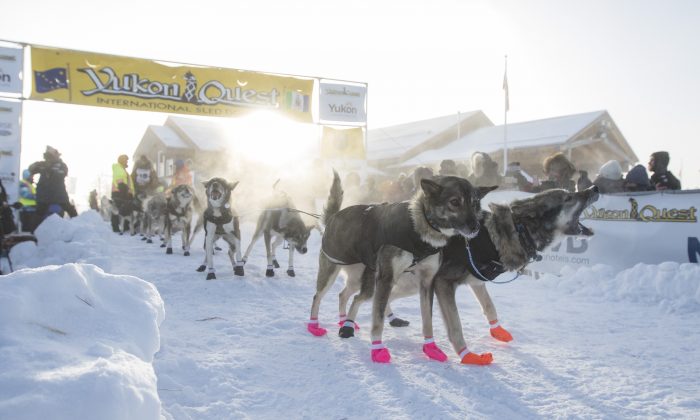 American musher Andrew Pace and his sled dog team get ready at the start line for the Yukon Quest in Whitehorse, Yukon on Feb. 2, 2019. (THE CANADIAN PRESS/Crystal Schick)
Canada

This is his second time winning what is considered the toughest dog sled race on the planet.

He crossed the finish line in Fairbanks, Alaska, on Monday afternoon with a full team of 14 dogs.

Thirty teams from Canada, the United States, and as far away as the Czech Republic and New Zealand were at the start line in Whitehorse on Feb. 2 to compete in the 1,600 kilometre race.

Brent Sass, this year’s Yukon Quest winner, finished the race with every dog he started with. “It was awesome. That’s how I could explain this race and this whole experience I just had with these dogs. It’s amazing.” https://t.co/b4xOR3IW4z pic.twitter.com/gHLJGbyg2T

By completing the race and being the first musher to make it to Dawson City, Sass will also take home two ounces of Klondike placer gold worth about $3,400.

Sass said he went into the race with a plan and a schedule.

“My goals were to have fun, to kill my run on Birch Creek, and be competitive, and we did all three of those goals, so that’s great,” he said after the win.

For the first time since 2003, mushers had to truck their teams between Braeburn, the first checkpoint north of Whitehorse, and Carmacks, about 75 kilometres further along the route.

Mushers and race organizers were concerned about the lack of snow and warmer weather along the trail.

Sgt. John Mitchell with the Canadian Rangers said earlier that a 32-member squad had been working on the Yukon side of the trail and conditions improved over the last week.