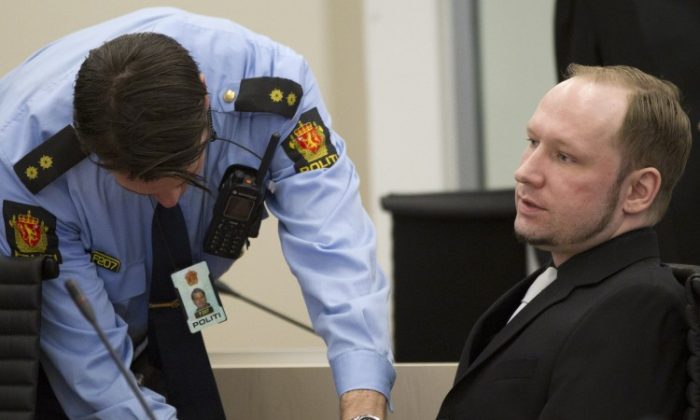 Right-wing extremist Anders Behring Breivik's handcuffs are removed in an Oslo courtroom on April 20. On day five of his trail for mass murder, Breivik gave a detailed account of his shooting rampage on Utoeya Island on July 22, 2011. (Daniel Sannum Lauten/AFP/Getty Images)
Europe

Norwegian terrorist Anders Behring Breivik gave macabre testimony about his mass murder on Utoya Island last summer at the end of the first week of his trial in Oslo.

The courtroom was very quiet when prosecutor Inga Bejer Engh asked Breivik to go back in time to July 22, 2011, when he traveled from Oslo, where he had just set off a bomb, to the small island of Utoya. Breivik explained the grim details of the shooting spree that left 69 people, most of them youths, dead.

Many in the courtroom wept hearing the detailed description of the killings, and the perpetrator’s own thoughts about the massacre, Norwegian broadcaster NRK reported. Breivik was playing with a pen while he gave his account of how he eventually surrendered to the police, who arrived on the island by helicopter.

Friday was the fifth day of the trial against the 33-year-old mass murderer. In the morning, he gave a chilling account of how he had actively shut off his emotions and empathy, arguing that he would “fall apart” if he tried to imagine what the survivors and families of the victims of the massacre are going through.

“July 22 is not about the victims. I have completely different aims,” he said.

Breivik said that he had begun his process of “de-emotionalization” back in 2006 in order to be able to carry out the attacks, and that his emotional setup now “works differently” than other people’s.

Breivik told the court about how he took the small ferry M/S Thorbjorn out to Utoya, disguised and posing as a police officer.

“I told them that there had been a terrorist attack in Oslo and that I was placed here as a matter of routine,” he said.

The attack, which Breivik himself had perpetrated, had left eight people dead and dozens injured.

Wearing a police uniform, Breivik began to gun down people who were participating in a summer camp for the ruling Norwegian Labor Party’s youth league. According to NRK, Breivik was largely unmoved while giving detailed accounts of what he remembered of moving between buildings and sites on the island, killing most people he came across. Some became paralyzed with fear and others screamed or ran, Breivik said.

He also said that he experienced some of the events “as if on TV,” but added that “most likely nothing like this has ever been shown on TV.” Breivik claims he entered a “state of shock” when he began the killing, and only remembers fragments.

Right before the police arrived on the island, Breivik contemplated taking his own life, but chose instead to surrender, in order to continue his “struggle” from prison.

Breivik faces the maximum penalty of 21 years in prison under Norwegian law, after which he’d be transferred into protective custody if still considered a danger to society. Protective custody can be indefinitely prolonged by five years at a time.

The trial against Anders Behring Breivik continues on Monday.