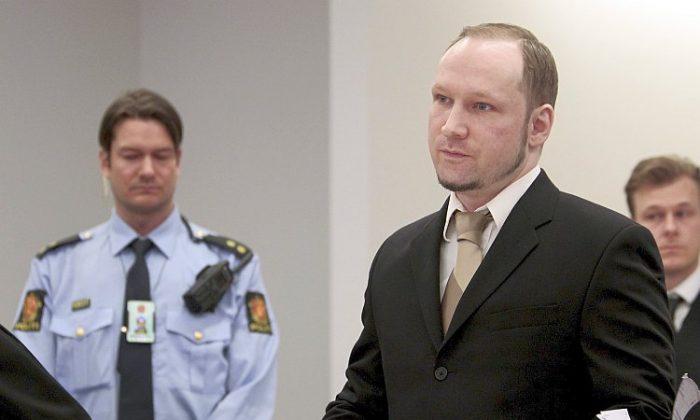 Anders Behring Breivik, who confessed to committing Norway’s worst mass killing since World War II, boasted about his deeds at great length on the second day of the trial on Tuesday.

“I have implemented the most sophisticated, spectacular, and the most brutal political assassination committed by [a] militant nationalist in Europe since World War II,” he said in a long, prepared statement. It was reported beforehand that the statement would take 30 minutes to read, but he spoke for over 70 minutes. Breivik was asked to cut it short on several occasions, but was allowed to continue nevertheless.

The day in court began with the dismissal of one of the lay judges, Thomas Indrebo, after it became known that he had written on his blog last year, right after the terrorist acts, that Breivik deserved the death penalty.

The case is being decided by a panel of five judges—two professional ones, and three civilian judges, or lay judges, which is an elected position in Norway.

The court did not broadcast any of the day’s proceedings, so as not to give Breivik a platform to air his beliefs, but live blogs provided text feeds, and an entire record of the proceedings is now available on the Norwegian Television (NRK) website in Norwegian.

The court and Breivik’s lawyer said he should be allowed to read his speech because it is a basic right, and it can also offer insight into the question of his sanity. Two sets of psychologists have evaluated him. The first declared him paranoid schizophrenic, but the more recent evaluation, which was more thorough in terms of observation time, declared him sane, in the legal sense.

The 33-year-old said that if given the chance, he would carry out the attack again, but also said he should be acquitted because he was protecting Norway from Islamization and multiculturalism, which he says is spreading thanks to the influence of “cultural Marxism” on all levels of Western society.

On Monday, he pleaded not guilty to terror and mass murder.

“If we wait 20, 30, 40 years, then ethnic Norwegians and Europeans will be the minority,” he said. “We are therefore unable to wait any longer. … [T]he intentions are based on goodness, not evil.” Breivik also dubbed his own acts “brutal,” but said that brutal is not the same as evil.

Throughout the day, Breivik appeared calm and collected and showed no emotion, both when reading his prepared statement and when answering questions, according to NRK’s live blogging from the courtroom.

The prosecution questioned him on his choice of uniform and over the existence of the so-called Knights Templar group, which investigators said previously does not exist. Breivik said that the group has several members, but noted the words he used to describe it in his manifesto and in police interrogations were “too pompous.” He explained that this was a deliberate tactic for propaganda purposes, but admitted that it badly misfired in the sense that it was used to brand him insane.

He added that he originally planned the assault as a suicide attack, saying he “did not expect to survive that day.” He also explained that he was inspired by al-Qaeda’s “glorification of martyrdom,” indicating that he saw himself as a martyr for the ultra-nationalist cause.

The mother of one of the victims of the Utoya Island camp attack, Rani Perreau, who attended Breivik’s second day in court, said she felt he was allowed “a little too much space” to read his views aloud, the Aftenposten reported.

“It’s tough to hear that he believes it was important to kill all those he killed,” she said.

Breivik is on trial for killing 77 people last summer in an attack on Oslo’s government district followed by a shooting spree at a Labor Party youth camp on Utoya Island. Breivik faces 21 years in prison, the maximum allowed in Norway, but the prosecution would have the option to send him back to prison when his sentence runs out, meaning that he would likely spend life in prison. If found insane, Breivik could be locked up in a psychiatric hospital indefinitely.