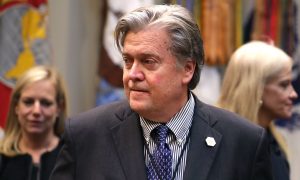 Trump on Bannon: 'He Not Only Lost His Job, He Lost His Mind'
0 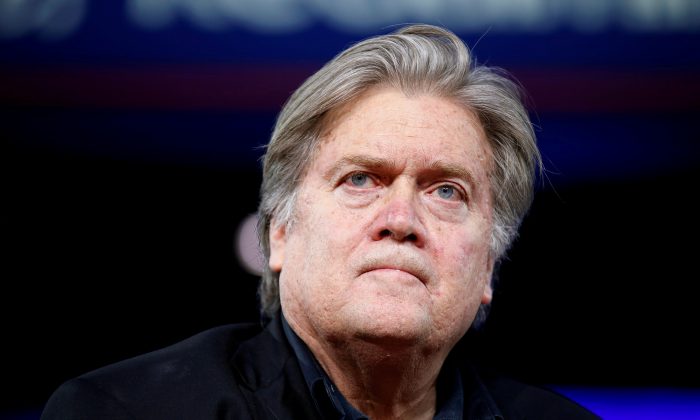 Breitbart Readers Respond to Steve Bannon Controversy: ‘I voted for Trump … I didn’t vote for Bannon.’

A large number of Breitbart News readers slammed the site’s executive chairman, Steve Bannon, on Wednesday as controversy swirled around critical comments Bannon made about President Donald Trump and his campaign team in a recently published book.

“I voted for Trump… I didn’t vote for Bannon,” says a top comment on a Breitbart article about Michael Wolff’s recently released book, “Fire and Fury: Inside the Trump White House.”

“I’ll stick with Trump, thanks,” he added.

“I’ve just about had enough of Bannon and his games,” wrote another reader. “He’s a psychotic fool. I’m done with this site.”

“I kept telling people Bannon was on an ego trip a dangerous back stabber,” wrote another reader. “Family never talks to strangers. Screw your Bannon.”

In the book, Wolff quotes Bannon’s critical comments about the Trump’s campaign team, specifically in regards to a June 2016 meeting between several members of the campaign team and Russian lawyer Natalia Veselnitskaya.

Trump responded to Bannon on Wednesday with a fiery statement, saying, among other things, that Bannon “lost his mind” after leaving the White House.

“Steve Bannon has nothing to do with me or my Presidency. When he was fired, he not only lost his job, he lost his mind,” Trump said in the statement. “Steve had very little to do with our historic victory, which was delivered by the forgotten men and women of this country.”

“Steve pretends to be at war with the media, which he calls the opposition party, yet he spent his time at the White House leaking false information to the media to make himself seem far more important than he was. It is the only thing he does well,” Trump said. “Steve was rarely in a one-on-one meeting with me and only pretends to have had influence to fool a few people with no access and no clue, whom he helped write phony books.”

Bannon was appointed as a senior counselor to the president before losing the job in August. He returned to Breitbart as an executive chairman shortly after leaving the administration.

“Stupid move by Steve and he needs to walk back or he and Trump are done,” wrote one user in a comment on Breitbart. “CNN already has this as breaking news and you can bet other liberal outlets will beat this to death. Why Steve?”

“What a cowardly way to get revenge – Bannon had better speak out NOW,” wrote another reader.

“I wonder what’s wrong with Bannon?”, wrote a reader. “I used to admire the dude, but if this is true, no more.”

The brief article detailing Bannon’s comments in Wolff’s book generated more than 12,000 comments in four hours as Breitbart readers weighed in about an unexpected turn from Bannon, who has until recently been publicly supportive of Trump.

The meeting between members of Trump’s campaign team and Veselnitskaya is at the core of Bannon’s criticism. The details of that meeting have been thoroughly investigated and no evidence of wrongdoing was ever found.

Donald Trump Jr. said that he had accepted the meeting because he believed Veselnitskaya would provide potentially damaging information on Hillary Clinton that could be useful during the campaign.

However, it appears that the Russian lawyer was conducting lobbying work against the Magnitsky Act. At the time of the meeting, Veselnitskaya was working on behalf of Russian-owned Prevezon. According to a July 15, 2016, Foreign Agents Registration Act (FARA) complaint filed with the Department of Justice, she was lobbying for a repeal of the Magnitsky Act while not having registered as a foreign agent.

The Magnitsky Act placed sanctions, including a freeze on overseas assets, on Russian officials believed to have been involved in the death of lawyer Sergei Magnitsky, who died in a Russian prison in 2009 after allegedly undergoing torture.

On Nov. 7, Fox News, citing a confidential source and court documents, reported that Veselnitskaya had also met with the co-founder of Fusion GPS, Glenn Simpson, before and after her meeting with Trump Jr. on June 9, 2016.

Fusion GPS was paid by the Clinton campaign and the DNC to produce a scandalous report on then-presidential candidate Donald Trump. Congress is currently investigating whether the so-called Trump dossier was used by FBI agents to obtain authorization to spy on the Trump campaign.

Sen. Chuck Grassley (R-Iowa), chairman of the Senate judiciary committee, requested information on July 11 on why Veselnitskaya was allowed to enter the United States without a visa.

“This raises serious questions about whether the Obama administration authorized her to remain in the country, and if so, why?” Grassley said.