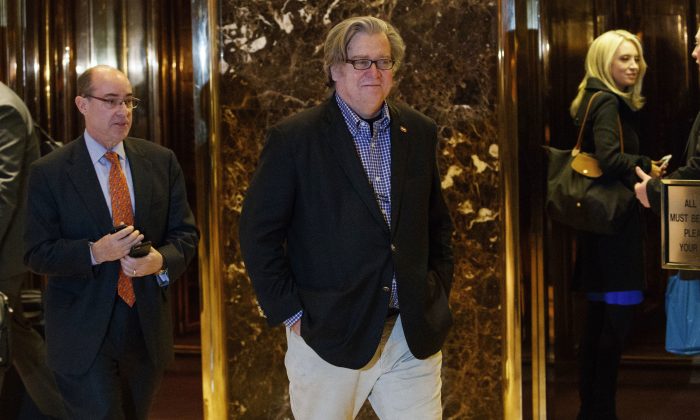 Breitbart News Is Filing a Lawsuit Against a ‘Major Media Company’

Breitbart News, the conservative-leaning website, is filing a lawsuit against a “major media company” over allegations it is a white nationalist website, reported The Hill.

Breitbart has been slammed by a number of media outlets after President-elect Donald Trump named Stephen Bannon as his senior White House strategist. Bannon is the former executive chairman of the website, which has been derided as being affiliated with the “alt-right.”

“Breitbart News Network, a pro-America, conservative website, is preparing a multi-million dollar lawsuit against a major media company for its baseless and defamatory claim that Breitbart News is a ‘white nationalist website,'” the statement reads.

“Breitbart News cannot allow such vicious racial lies to go unchallenged, especially by cynical, politically-motivated competitors seeking to diminish its 42 million monthly readers and its number one in the world political Facebook page. Breitbart News rejects racism in all its varied and ugly forms. Always has, always will,” the statement said.

“The diversity of the company’s news coverage and its staff continue to embody Andrew Breitbart’s colorblind, distinctly American commitment to ‘E pluribus unum’—out of many, one.”

A number of media outlets have focused on a few stories published by Breitbart, including one penned by David Horowitz, who described conservative commentator Bill Kristol, who was eyeing a presidential bid this year, as a “renegade Jew.” Horowitz was raised Jewish.

Many of the same media outlets have also accused Bannon of anti-Semitism, racism, and sexism for other headlines published by Breitbart. His ex-wife also accused him of making anti-Semitic comments—which according to CNN, Bannon strongly refuted.

“At the time, Mr. Bannon never said anything like that and proudly sent the girls to Archer for their middle school and high school educations,” Alexandra Preate, a spokeswoman for Bannon, said in a statement to CNN this year.