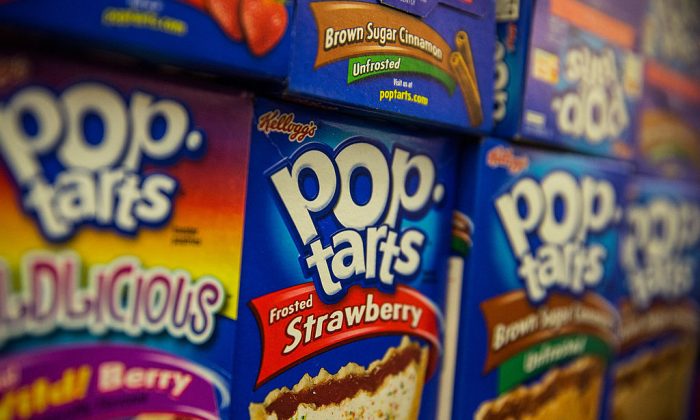 A file photo of boxes of Pop-Tarts for sale in New York City. In 2014, Kellogg, maker of Pop-Tarts, announced it would only buy palm oil, an ingredient in Pop-Tarts and in many other processed foods, from companies that don't destroy rainforests where palm trees are grown. (Andrew Burton/Getty Images)
US

Kellogg's pulls ads from website, says it isn't 'aligned with our values as a company'
By Epoch Newsroom

The right-wing news outlet Breitbart News announced it is organizing a boycott of cereals giant Kellogg’s after the firm said it would pull advertising from the website.

Breitbart started the hashtag #DumpKelloggs on Twitter before it was the top trending term on the social media platform on Wednesday night. On Facebook trends, it was also ranked highly. As of Wednesday night, the hashtag disappeared from Twitter’s trends section.

“We regularly work with our media-buying partners to ensure our ads do not appear on sites that aren’t aligned with our values as a company,” stated Kellogg’s Kris Charles in explaining the pulling of ads. “We recently reviewed the list of sites where our ads can be placed and decided to discontinue advertising on Breitbart.com. We are working to remove ads from that site.”

As a result, Breitbart went on the counter-offensive, heavily featuring articles about the boycott on its front page.

“Breitbart News is the largest platform for pro-family content anywhere on the Internet. We are fearless advocates for traditional American values, perhaps most important among them is freedom of speech, or our motto ‘more voices, not less,'” said Breitbart News Editor-in-Chief Alexander Marlow . “For Kellogg’s, an American brand, to blacklist Breitbart News in order to placate left-wing totalitarians is a disgraceful act of cowardice. They insult our incredibly diverse staff and spit in the face of our 45,000,000 highly engaged, highly perceptive, highly loyal readers, many of whom are Kellogg’s customers.”

A number of other companies have pulled ads from Breitbart, including Allstate, Nest, EarthLink, Warby Parker, SoFi, and the investment firm Vanguard, The Guardian reported.

A number of Donald Trump supporters have called for boycotts during the Republican candidate’s campaign, including ones against Pepsi (and its subsidiaries), Oreos, and Netflix.

Some Twitter users who were in favor of the boycott tweeted photos of Kellogg’s products in trash cans.

1) open up ur pantry

3) throw them in dumpster pic.twitter.com/KkdRc2v5iS

Some lashed out at Breitbart and its readers for promoting the hashtag, saying they’ll purchase even more Kellogg’s products now after the firm pulled its ads.

Thank you #Kelloggs for taking a stand against #Breitbart & #racism & #altright wackos! #DumpKelloggs won’t happen with me!