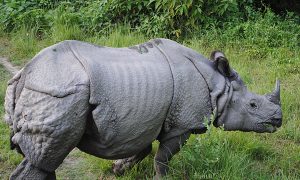 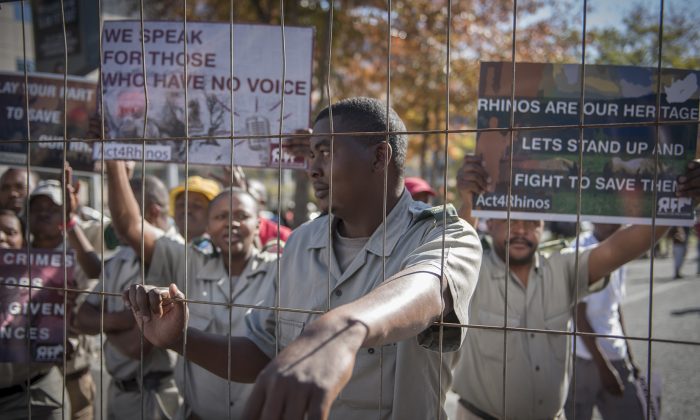 Demonstrators protest outside the African Union Summit, held in Johannesburg, calling for the protection of rhinos by Africa countries. Rhino breeders and game reserve owners took the South African government to court this week to try to overturn its ban on the domestic trade of rhino horn. (AP/Shiraaz Mohamed)
Africa

JOHANNESBURG—Calling rhino horns a renewable resource, rhino breeders and game reserve owners have taken the South African government to court to try to overturn its ban on the domestic trade of rhino horn.

They maintain that harvesting the horn from the living rhinos at their ranches and selling it legally will drive poachers currently slaughtering the endangered animals out of business.

“It is in the public interest that the moratorium be lifted and that private rhino owners be able to trade rhino horn in South Africa,” said Izak du Toit, a lawyer representing one of the rhino owners in the civil court case filed last week.

The South African government enacted a ban on the domestic trade of rhino horn in 2009 after poaching caused populations to plummet. An international ban on rhino horn has been in place since 1977.

The Convention on International Trade in Endangered Species of Wild Fauna and Flora (CITES), which oversees the trade of wild animals and plants, announced last week that it will hold its next meeting in Johannesburg in September 2016. At the last CITES meeting two years ago, South Africa proposed that lifting the international ban be put on the table for discussion in 2016.

Some rhino experts have mixed views about lifting the ban.

Breeders say dehorning is quick and painless, similar to trimming a horse’s hoof. Rhinos grow about 1-2 pounds (up to a kilogram) of horn a year, which would give owners up to 10 harvestable horns within an animal’s lifetime. A DNA database to track rhino horn exists.

Rhinoceros horns are highly prized in Asia, where it is considered a status symbol and cure for a range of ailments, from cancer to hangovers though there is no evidence it has any use in that capacity. Demand is so great that consumers pay more for it than they do for gold or cocaine.

Harvesting horns would make live rhinos more valuable than dead ones and drive prices down, reducing incentives to poach, according to breeders.

Those in the anti-trade camp are skeptical.

“This is supported by greed, not conservation,” says Allison Thomson of Outraged South African Citizens Against Poaching, who says breeders just want to offload their stockpiles and that a legal trade would be riddled with corruption.

The demand for rhino horn has fueled a catastrophic increase in rhino poaching in South Africa, going from 13 cases in 2007 to 1,215 in 2014, according to the government. South Africa is home to approximately 90 percent of the world’s rhinos.

The government has said it will not lift a national ban before the CITES meeting next year. It says its review of rhino experts in South Africa, including biologists, park managers, economists, veterinarians, private rhino owners and hunters, shows that most support legalizing the international trade.

Without a legal international trade, experts say a domestic trade in South Africa would fuel the black market and poaching. But the breeders who filed the lawsuit believe that even if the horn is still trafficked abroad illegally, legalizing the trade in South Africa could save some rhinos.

“We would sell to the poachers to prevent them from killing rhinos,” du Toit said.