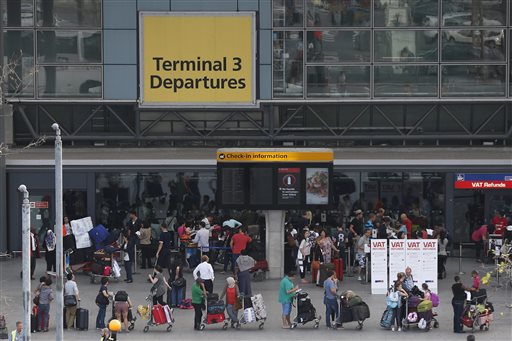 London’s Heathrow Airport has been placed on high alert by U.K. officials over fears that female suicide bombers might hide explosives in breast implants.

U.K. experts said there is evidence that al-Qaeda could go after flights out of London

These implants are special, officials added, because if they are injected with another liquid, it could cause an explosion capable of taking down a plane, according to a report from a British tabloid.

“There are genuine fears over this,” a Heathrow airport staff worker told the Daily Mirror tabloid. “We have been told to pay particular attention to females who may have concealed hidden explosives in their breasts.”

“This is particularly difficult for us to pick up but we are on a very high state of alert. It’s led to long queues here at Heathrow – much longer than usual at this time of the year,” the staff member added.

Officials believe that notorious al-Qaeda bombmaker Ibrahim al-Asiri has developed the capability to implant bombs inside people. Asiri, a former chemistry student, has been dubbed the “world’s most dangerous terrorist” by Time magazine due to his bombmaking abilities. Asiri, who is a member of Yemen’s al-Qaeda on the Arabian Peninsula, has developed bombs that can pass through airport detection, officials have said in the past.

He is considered the mastermind behind the attempted assassination of a top Saudi counterterrorism official in 2009, the failed attack on a Detroit-bound plane in 2009, and another plot in 2010.

U.S. government officials said that his bomb plots are why the TSA has ramped up security in recent years–namely the TSA’s controversial body scanners.

There is a great fear that al-Qaeda are planning on using internal devices to try and get through airport scanners.

Explosives expert Andy Oppenheimer told the Mirror: “These explosives could be in breast implants.”

“There is a great fear that al-Qaeda are planning on using internal devices to try and get through airport scanners,” he added.

Independent security expert Paul Beaver said that there are “serious concerns” over the new bombs.

“There are currently deeply serious concerns over body cavities and implants of all kinds – including breast implants – being used to hide explosives,” he told the paper. “It is taking longer to get through Heathrow and other airports in Europe and North America because of these fears. They are taking longer to screen people and there is definitely some sort of profiling going on.”

He added: “The general alert state remains the same in the UK but overseas, the recent Pakistan prison breakouts and foiled attacks in Yemen are raising fears of a new jihadist wave of violence.”