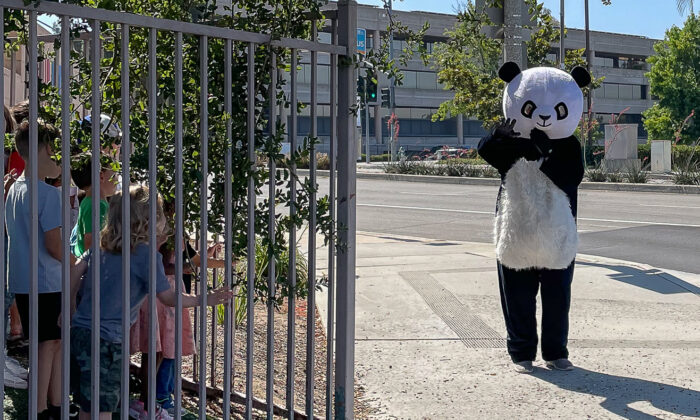 After nearly four years of entertaining thousands around Brea, Calif., “Panda Man” has garnered a large social media following thanks to his signature dance moves accompanied by light-hearted music playing from his boombox.

Wearing a large panda head and onesie panda suit, the character has spent much of his free time attempting to “cheer people up” through his lively dancing around public spots in the city.

“It’s funny seeing people’s reactions, I can tell no one knows how old I actually am,” Panda Man told The Epoch Times.

At just 18 years old, the renowned character has remained largely anonymous in the community, save his family and close friends.

Recently, however, he exclusively revealed to The Epoch Times that his first name is Ben and that he works for Mike’s Pizza in Brea.

“I’m curious to see how many people read this article about me and come into my work to ask if it’s really me,” Ben said.

“Whenever I feel stressed I just grab my panda head and boombox and go dance,” Ben said. “It makes me happy to cheer other people up who could really use it.”

One of his favorite fan reactions, Ben said, came from a woman who unexpectedly approached him. Though her face appeared “very serious,” she gave him one of the “deepest” hugs he had felt from anyone.

“I was surprised, but hugged her right back,” he said. “I could just feel the energy, and she just hugged me even tighter. That was the moment that made me decide to continue doing this.”

And praise from fans continues to circulate. On a private Facebook group dedicated to the city, hundreds of Ben’s followers voiced their approval at his post announcing his latest return to dancing around the city after a short hiatus.

On the page, fans and locals largely showed positive reactions to Ben’s return with nearly 800 combined likes and comments.

“We saw you the other day. Thank you for dancing and bringing joy to Brea!” one commenter wrote.

Even one of Ben’s younger sisters has joined him on occasion, donning her own red panda outfit and dancing alongside her brother to pop classics such as Carly Rae Jepsen’s “Call Me Maybe,” a favorite of Ben’s.

During one particular dance session, a representative from a local preschool asked Panda Man to come surprise the children with a dance party.

Donning his signature costume, he came accompanied by his mother who blasted music from her car stereo just behind him as the kids rushed toward him.

Others have even invited Ben to dance at their private events, including birthday parties and other get-togethers, though the character remains largely a public figure in Brea.

With no plans to stop his dancing any time soon, the recent high school graduate’s motto encompasses his mission.

“I’m my own life’s mascot,” he said. “I thrive for people’s happiness and laughter.”

Four years and thousands of reactions later, along with a large following, the mascot remains a steady figure of entertainment around the city.