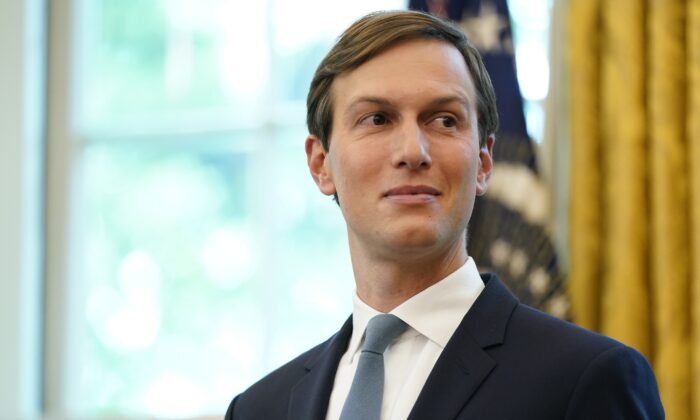 Jared Kushner listens during an announcement in the Oval Office of the White House in Washington on Sept. 11, 2020. (Andrew Harnik/AP Photo)
US Features

The Russiagate saga went into overdrive in May 2017 when President Donald Trump fired FBI director James Comey, marking the start of a two-year investigation that seriously hobbled Trump’s presidency. If we were to believe the corporate media, it was the president’s son-in-law, Jared Kushner, who came up with the idea of firing Comey.

Not so, says Kushner in his new memoir. The real story of Comey’s firing is that Trump noticed that something “was off” about Comey when he testified before Congress in the weeks ahead of his firing. Over dinner with Kushner and Melania and Ivanka Trump, President Trump told the others that Comey’s testimony was “erratic and inauthentic” and started drafting a letter firing Comey.

Trump’s intuition was remarkably accurate. As we recently found out from documents released as part of the Durham investigation, Comey lied to Congress during those crucial weeks, talking up the Russia investigation while concealing the fact that all investigative leads had collapsed.

This is one of many fly-on-the-wall stories in Kushner’s account of his time as Trump’s senior White House adviser. In another anecdote, Kushner recounts how he was kicked out of a meeting between Trump, White House counsel Don McGahn, and future Trump lawyer Ty Cobb, supposedly because Kushner was a witness in the Russia affair. In truth, McGahn had just made a lame excuse because he didn’t want Kushner to be in the room as he was trying to get Trump to hire Cobb—something that Kushner was trying to prevent. Kushner then reappeared in the Oval Office through a backdoor, baiting Trump into an adjoining study, imploring him not to hire Cobb. According to Kushner, Trump was annoyed with Kushner for interrupting the meeting but then, “miraculously,” got distracted by a Fox News segment that ran on one of the TVs in the study.

If much of this sounds like the movie “Mean Girls,” that does not seem too far off the mark. Despite his undeniable intelligence, Kushner, in his own telling, appears to have been completely unprepared for the brawling, backstabbing, and one-upmanship that defines Washington, D.C., both from the inside and outside the White House.

Kushner seems blissfully unaware, even now, that he gave Trump’s adversaries a huge assist by insisting that Trump discard his letter firing Comey and instead ask establishment White House lawyers to draft a new letter. When Trump went on Lester Holt’s show in the immediate aftermath of the Comey firing, he inevitably tripped up over the conflict between his real reasons for firing Comey and the made-up reasons put forward by his lawyers.

In another Russiagate story, Kushner appeared to have been completely unaware of the games being played by Democrats, the media, and special counsel Robert Mueller’s office in relation to Kushner’s attendance at the infamous Trump Tower meeting in June 2016. While every attendee—including now Kushner—has attested that the meeting was about easing adoptions of Russian children, the media spun the meeting into a collusion tale. Kushner had to be set straight by his personal lawyer, Jamie Gorelick.

Gorelick’s appearance symbolizes yet another—perhaps unintentional—theme of the book, the incestuousness of Washington: Gorelick is a Democratic backer of Hillary Clinton and an attorney at Wilmer Hale, Mueller’s law firm.

As Kushner relays his stories and experiences—many of which have to do with his forays into foreign policy—it becomes clear that he was well-meaning but woefully unprepared. Unlike Trump, Kushner does not appear to be a fighter in any sense of the word. In fact, the two men appear to have little in common, other than the fact that Kushner married Trump’s daughter. Time and again, Kushner relays how Trump lectured him on having to fix his own problems. At one point, Trump admonished Kushner: “If you want to work here, you have to figure out how to get people not to leak on you.” In reality, it seems that Trump was torn between family loyalty and frustration by Kushner’s naivete.

Kushner himself appears to lack the requisite self-awareness to have understood this. There is little acknowledgment that Kushner only had his role because of whom he married. He also appears to not understand that sharing the story of Trump’s admonition about being leaked on will end up making Trump look bad, given that Trump was leaked on far more than Kushner.

In contrast to Trump adviser Peter Navarro’s book “In Trump Time,” this memoir is neither passionate nor emotional. The New York Times described it as soulless but that is far too harsh. This is not an intentionally heartless account, it’s just who Kushner is and how he tells his stories, factually and mechanically. The Secret Service appears to have been quite aware of these character traits, having given Kushner the code name “Mechanic.”

Kushner’s memoir comprises 59 chapters, averaging only eight pages. Each chapter tells a distinct story, the bulk of which concern Kushner’s foreign policy adventures, such as the making of the Abraham Accords or meeting Kim Jong-un. Kushner’s stories are crucial chronicles of a unique presidency. In many ways, Kushner’s lack of self-awareness and mechanistic style benefits the book as a historic, fly-on-the-wall account of what it was really like inside the Trump White House.

Unfortunately, Kushner cherry-picks stories that are helpful to him. For instance, Kushner does not say much about the 2020 election, nor about the events of Jan. 6, 2021, claiming only that he is confident that no one at the White House anticipated violence. Kushner also glosses over the fact that White House Coronavirus Task Force coordinator Deborah Birx deliberately deceived the White House about her “15 days to slow the spread” initiative, focusing instead on his own role in Operation Warp Speed. As to leaving the White House, he says he “was excited to make some adjustments” to his life, suggesting that Kushner never became comfortable in his White House role, a theme that is evident throughout the book.

Undoubtedly, Kushner’s memoir would have been a lot more interesting if he had talked more about the bad, as well as the good. That said, short of Trump writing his own memoir, this is as close a look as we will get inside the Trump White House.