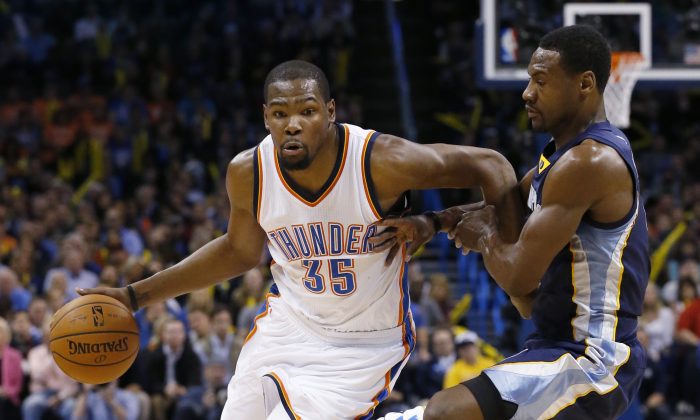 Breaking Down the Remaining Schedule for Thunder, Suns, and Pelicans

It’s the Suns, Thunder, and Pelicans fighting for the last playoff spot in the Western Conference. The recent loss of Blake Griffin for the Clippers made it seem like L.A. would lose a bunch of games–meaning another playoff spot would be up for grabs–but DeAndre Jordan’s recent dominance and tough wins over contenders have put that thought to rest.

So it’s back to three teams fighting for the eighth spot, and predictions about which one will make it.

The best race would have all teams fully healthy. Provided Kevin Durant and Anthony Davis heal over the All-Star break, the three teams could be close to full health (with a few exceptions, primarily Steven Adams and Jrue Holiday).

Let’s break down the remaining schedule for all three teams in contention to see how they’ll fare. Projections are in parentheses (W=Win, L=Loss), and assume that Durant and Davis play in all remaining games.

The Thunder nearly beat the Mavericks on the road even without Durant, and with Russell Westbrook shooting horribly.

Charlotte’s defense is one of the best in the league but won’t be able to contain Durant and Westbrook.

Denver looks like it can’t beat anyone right now, and the team will likely lose several of its best players by the trade deadline.

Indiana’s defense is also stingy, but the team just isn’t a big threat without Paul George.

OKC has beat Phoenix twice already this season at home, and will look for another win on the road.

The Blazers are tough to beat at home, posting a 23-5 record through the All-Star break.

Los Angeles doesn’t have a chance unless Durant is hurt.

Philadelphia is playing better than the early season misery, but can’t knock off teams like OKC just yet.

The Bulls are better on the road than at home, but will be playing hard as they try to avoid a first-round matchup with the Wizards.

Toronto beat OKC earlier this season at home, when the Thunder were playing without their two stars. Payback time.

DeAndre Jordan’s recent dominance could spark the Clips to even better play when Blake Griffin returns.

Minnesota is putting up better numbers with Ricky Rubio back, but are no match for OKC.

The Thunder will get revenge on Chicago for the recent loss.

Dallas will get the win over Oklahoma City at home.

Boston is one of the weaker teams in the Eastern Conference.

The Hawks have beaten almost every team in the league, and are especially strong at home.

Miami is struggling this season, and barring a major trade will be lucky just to make the playoffs in the East.

San Antonio won’t be able to rest its aging stars as much this season, as it vies for a better seed in the West.

Utah is an up-and-coming bunch but has few wins over top-notch teams.

OKC will be pumped up for this game, which could be huge depending on the records at the time.

Dallas snags another win at home.

Memphis gets payback at home.

The homestand starts with a close win over Houston.

Sacramento could be dangerous under George Karl, but the Thunder need this game badly.

Every team loses to teams it’s not supposed to. Look for this loss or a loss to the Kings.

OKC brings its best basketball as it looks to secure eighth place.

The Thunder trump the young team.

Orlando, still without a permanent coach, drops to New Orleans.

Miami doesn’t stand a chance if Anthony Davis is healthy.

Behind another unbelievable stretch from Davis, Toronto falls on the road.

Brooklyn may have made a few trades by now but New Orleans gets the home win.

Miami, still struggling to stay afloat in the East, loses on the road.

New Orleans could have a nice winning streak by this time, and should add to it in Denver.

Dallas is tough at home and needs every win it can get.

Detroit actually has a better road record through the break.

Boston brings energy but look for a Pelicans win here.

The Pelicans beat Memphis again at home, after their 106-95 win in January.

Milwaukee triumphs at home, with its frenetic defense and sharp shooting.

New Orleans has dropped too many games to inferior opponents, and this could be another one.

Another win over Denver.

The Pelicans get the upper hand in the season series following the 110-106 home win in December.

Los Angeles is doing better than expected and might have a bolstered bench by now.

The Pelicans start a new winning streak at home.

Sacramento poses a challenge under Karl but the Pelicans should win.

Los Angeles is in full tanking mode to get the top-five pick.

New Orleans looks to grab a game from Portland after two losses earlier in the season.

The race for eighth should still be close at this point, and these two teams will fight hard for a win.

Another win over the T-Wolves.

Anything could happen this season, but San Antonio is probably resting players on the last game of the season.

Minnesota loses another to a playoff contender.

Chicago beats Phoenix on the road after the Suns did the same to them.

A likely win over Boston at home.

Oklahoma City gets a crucial win over the Suns.

San Antonio beats Phoenix again at home after a 100-95 win in January.

Phoenix looks for revenge after a bitter loss in December.

Despite some rough losses, the Suns are 15-6 against the East.

One of those rough losses.

Phoenix surprises Cleveland on the road.

Golden State trounced Phoenix 106-87 in late January after the Suns got a nice win in November.

The Hawks are 15-4 against the West through the All-Star break, including wins over eight of the top ten teams in the conference.

New York is in full tank mode as Carmelo shut it down a while back.

Dwight Howard could be back at this point, but Houston has beaten Phoenix three times–including without Howard.

Dallas falls for a third time to Phoenix.

The Suns beat the Kings in the homestand.

Phoenix gets another home win over the Blazers after a 118-113 win in January.

The Suns get a win over OKC to stay in the thick of the playoff race.

Portland handed Phoenix a 108-87 drubbing in early February at home.

Golden State gets the upper hand, ending the season series 3-1. If the Suns do make the playoffs, Golden State likely wins.

Utah falls on the road,

Atlanta takes down another Western contender.

Dallas avoids being swept in the season series.

The Suns drop another close game to the Pelicans.

San Antonio could easily be resting at this point for the playoffs.

Could a win here propel Phoenix to a playoff berth?