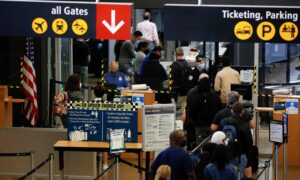 Breaking the Cycle of Poverty in Dubai

DUBAI—In a city where poverty and debt is always someone else’s problem, two volunteer workers are doing all they can to provide a safety net for those who have fallen through the cracks of society.

Elle and Roger Trow, from Britain, were so moved by the plight of workers in labor camps that they set up a charity to help provide them with food and other essentials.

Two years later, the husband and wife team now provide a range of services such as support for Filipino maids escaping ill-treatment and repatriation for those who have no way to get home.

In recognition of their efforts, their charity Helping Hands won the “Guardian of the Year” category at the Inspire Dubai awards at the beginning of the month.

Their work started in October 2006 when they were invited to a labor camp in Al Quoz to meet Filipino workers who were in a financial bind. The couple decided they needed to buy food to provide for the men who couldn’t afford to feed themselves.

“It was our intention to break the cycle of debt the men were in,” said Elle Trow. “They were taking credit from the local grocery shop because they didn’t have enough money to buy food. When they did get paid, all of it was being taken by the shop manager.”

After the trickle of donations turned into a flood, the couple began making one or two trips to labor camps every week to drop off food items such as tea bags, sugar, tomato paste, sunflower cooking oil, rice, canned fish, and milk.

Also included in the “care packs” given to laborers, was a pillow and pillow case, a towel, a sheet, razors, soap, a toothbrush and a tube of toothpaste, and nail clippers.

Moreover, the couple has also begun developing recreational facilities in the labor camps in order to get the workers away from self-destructive habits. Initiatives include a computer room and a Hindi film library.

“We have a team of doctors and counselors who go into the camps with us,” said Trow. “Depression is quite common. They try and numb their pains by drinking. Some of them feel so desolate that they take their own lives.

“They can’t talk to their families and friends back at home and most of them feel very lonely and isolated. We try and give them a phone card so they can talk to their relatives back at home. Even if it is only a few minutes, it could save a life.”