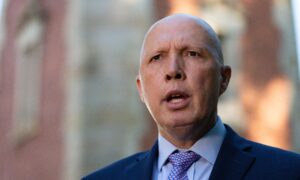 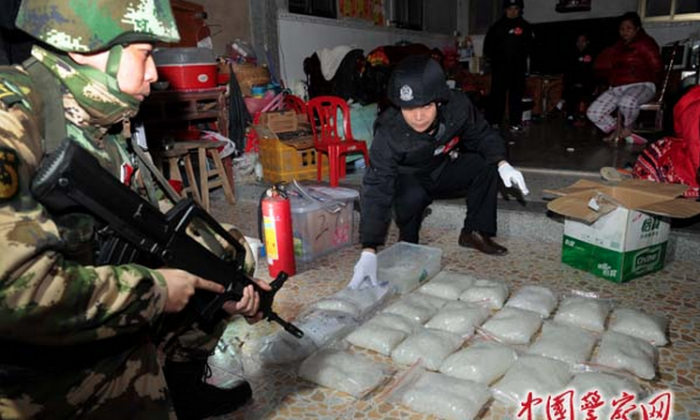 Chinese authorities recently uncovered a village in Guangdong Province producing tons of methamphetamine. The raid also revealed a cache of AK-47s, homemade grenades, and crossbows, reports said. As many suspected when the news first broke, the whole operation was being carried out with the blessing of local Party officials, the whole village having come to straddle the divide between an official and a criminal operation.

A squadron leader of the regime’s local anti-drug squad was one of the chief protectors of the drug gang. Official media on Sunday said that the officer, surnamed Guo, has been arrested and placed under disciplinary interrogation.

Guangdong police ended up seizing 3 tonnes of methamphetamine and arresting 182 of the gang’s footsoldiers in the village of Boshe, in Lufeng city, on Dec. 29. Over 3000 police, armed police, border defense guards, and helicopters were involved in the pre-dawn raid.

At least 18 drug trafficking gangs were broken, and 77 drug plants, along with a bomb manufacturing site, were dismantled. Along with the 3 tonnes of methamphetamine, 23 tonnes of precursor materials were uncovered.

Some of the local police were acting as enforcers for the drug gangs, having been paid off by local officials to protect drug production, according to Southern Metropolis Daily, a Chinese newspaper.

Police investigations showed that Cai Dongjia collected drug case information from other police, and tipped off the drug makers so they could escape before being arrested. He also bribed case handlers in the police force, thus helping the traffickers.

Qiu indicated that two police officers even transported drugs in their police vehicles, acting as traffickers for over two years.

Last year, 21 Party and government cadres, including three police chiefs and officers, were involved in 10 illegal drug cases, the Southern Metropolis Daily reported. Seven of them were placed under the Party’s secret disciplinary interrogation procedures.

Drug making and trafficking is one of the backbone industries in Boshe village. Reports in the Chinese press indicated that 20 percent of the 1,700 families in the village (which has a total population of 14,000 people) were directly involved in drug production.

Even women and children are involved, according Hong Kong’s Apple Daily. Some women earn 300 to 500 yuan ($50 to $80) a day by cutting ephedra, a precursor to meth, into small pieces, the report said. Children of elementary school age work in drug plants in Boshe, emptying capsules of chemicals during their summer and winter breaks. They can clear 10,000 yuan ($1,652) a month, the paper said.

The Boshe village committee even put up a sign next to rubbish tip saying “Dumping drug manufacturing waste is prohibited!”

Violent conflicts between police and drug makers have often taken place in the past in Boshe. When police would patrol the streets, for example, hundreds of motorcycles would be used to block the roads, or nail plates would be set up to pop their tires. Some villagers even threw stones at the police cars from nearby buildings.

A new village Party secretary, Cai Shuibao, has now been appointed to Boshe by higher-level officials, and has been tasked with rebuilding the Party branch and ensuring that it is firmly under the discipline of the Party organization.

In a speech that was published online, he said at a recent meeting that he would be selecting young and promising Party members who have had no background in the drug industry.

Some locals are concerned that, with the crackdown, a large number of villagers will have lost their primary source of income, which could lead to protests.