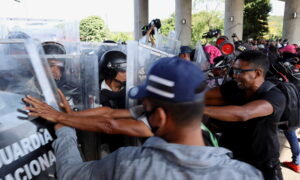 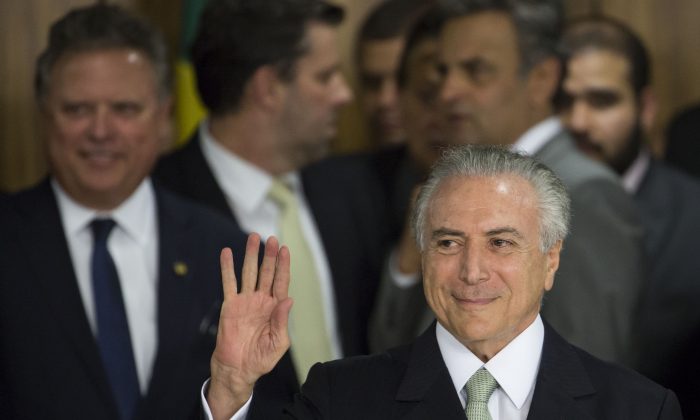 BRASILIA, Brazil—The new acting president is calling for unity in Brazil, while the leader just suspended by the Senate is vowing to fight what she calls a coup, underscoring the deep political polarization in Latin America’s most populous nation.

Rousseff, whose popularity has plummeted amid the worst recession since the 1930s, is accused of using accounting tricks to hide large deficits in the federal budget. Opponents argue that damaged the country, but Brazil’s first female president called it a baseless case cooked up so elites who loathe her leftist Workers’ Party could snatch back power.

Temer moved quickly to announce a new Cabinet and said his government’s first priority is to get Brazil’s stalled economy going again. He also promised to support the widening investigation into corruption at the state oil company that has already ensnared leading politicians from a variety of parties and even implicated Temer himself.

Emerging a few hours after the Senate vote, Temer said it was a sober moment and made a bid for peace with Rousseff, offering his “institutional respect” for her and recognizing the impeachment campaign has caused deep divisions.

“This is not a moment for celebrations, but one of profound reflection,” he said during a swearing-in ceremony for his 22 Cabinet members. “It’s urgent to pacify the nation and unify the country. It’s urgent for us to form a government of national salvation to pull this country out of the serious crisis in which we find ourselves.”

Temer said Brazil must get its economy back on track and deal with the government budget deficit.

“Our biggest challenge is to staunch the process of freefall of our economy,” he said. “First of all, we need to balance our public spending. The sooner we are able to balance our books, the sooner we’ll be able to restart growth.”

Rousseff warned that Temer plans to dismantle government social programs put in by her party that benefit around one-fourth of the Brazilian population, but he insisted the programs would be maintained and “perfected” under his leadership.

The economy has been predicted to contract nearly 4 percent this year after an equally dismal 2015, and inflation and unemployment are hovering around 10 percent, underscoring a sharp decline after the South American giant enjoyed stellar growth for more than a decade.

Although the specific impeachment charges against Rousseff are limited, the effort to remove her became as much a referendum on her leadership amid the economy’s slump and the revelation of a mammoth bribery scheme involving the state-run Petrobras oil company.

Rousseff was immediately suspended for 180 days pending a trial in the Senate. If two-thirds of the 81 senators vote to find her guilty, Temer will serve out the remainder of her term, which ends in December 2018.

A defiant Rousseff said the action was a coup cooked up by power-hungry opponents. She has said the “chief conspirator” was Temer, the longtime leader of the centrist Democratic Movement Party that is known less for a specific ideological stance than for its skill at backroom deal making.

In what many Brazilians think could prove to be her last speech as president, Rousseff said she wouldn’t give up.

“I am the victim of a great injustice,” said the former Marxist guerrilla who rose to power in 2010 on the coattails of her wildly popular predecessor and mentor, Luiz Inacio Lula da Silva.

“I fought my whole life and I’m going to keep fighting,” she said, signaling that she and her supporters may intend to make good on a promised campaign of protests and strikes that could complicate Temer’s government.

The scandal at Petrobras revealed deep-seated corruption that cuts across the political spectrum in Brazil and has entangled top officials from the Workers’ Party and the opposition alike as well as top businessmen.

Temer has been implicated by witnesses in the scandal, but he has not been charged. The impeachment drive’s main motor, former House Speaker Eduardo Cunha, has been charged in the scandal and was suspended last week as speaker over allegations of corruption and interfering with justice.

Several of Temer’s Cabinet appointees have also been hit with corruption charges and other allegations.

The acting president pledged that the investigation will continue unfettered. “It deserves to be followed closely and protection against any interference that could weaken it,” he said.

Temer’s new Cabinet raised eyebrows because all its members are middle-age or elderly white men — a particularly sore point in this majority non-white country. Six women, including one black, were included in the 39 members of Rousseff’s Cabinet when she began her second term last year.