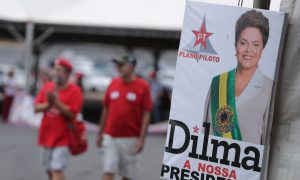 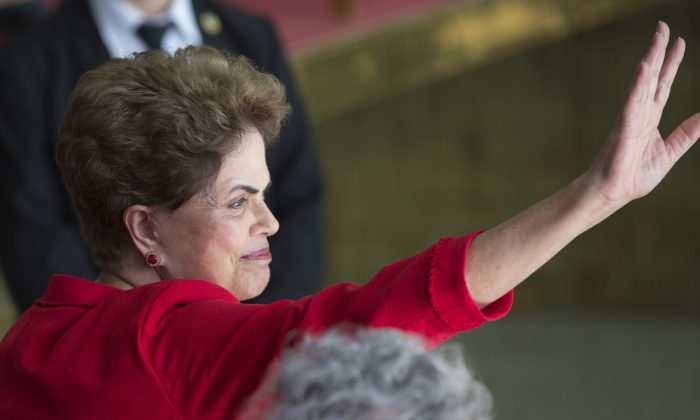 Brazil's suspended President Dilma Rousseff waves to supporters before speaking from the official residence of the president, Alvorada Palace in Brasilia, Brazil, Wednesday, Aug. 31, 2016. In her first remarks after being ousted as Brazil's president, Rousseff is vowing to form a strong opposition front against the new government, saying, "They think that they beat us, but they are wrong." (AP Photo/Leo Correa)
International

BRASILIA, Brazil—Brazil’s Senate on Wednesday voted to remove President Dilma Rousseff from office, the culmination of a yearlong fight that paralyzed Latin America’s largest nation and exposed deep rifts among its people on everything from race relations to social spending.

While Rousseff’s ouster was widely expected, the decision was a key chapter in a colossal political struggle that is far from over. Rousseff was Brazil’s first female president, with a storied career that includes a stint as a Marxist guerrilla jailed and tortured in the 1970s during the country’s dictatorship. She was accused of breaking fiscal laws in her management of the federal budget.

“The Senate has found that the president of the federal republic of Brazil, Dilma Vana Rousseff, committed crimes in breaking fiscal laws,” said Chief Justice Ricardo Lewandowski, who presided over the trial.

Opposition lawmakers, who made clear early on the only solution was getting her out of office, argued that the maneuvers masked yawning deficits from high spending and ultimately exacerbated the recession in a nation that had long enjoyed darling status among emerging economies.

Nonsense, Rousseff countered time and again, proclaiming her innocence up to the end. Previous presidents used similar accounting techniques, she noted, saying the push to remove her was a bloodless coup d’etat by elites fuming over the populist polices of her Workers’ Party the last 13 years.

The opposition needed 54 of the 81 senators to vote in favor for her to be removed. They got many more, winning in a landslide of sorts, 61-20.

“Today is the day that 61 men, many of them charged and corrupt, threw 54 million Brazilian votes in the garbage,” Rousseff tweeted minutes after the decision.

In a second Senate vote about 30 minutes later, Rousseff won a minor victory as a measure to ban her from public office for eight years failed. The 42-36 vote fell short of the 54 votes needed for passage.

In the background of the entire fight was a wide-ranging investigation into billions of dollars in kickbacks at state oil company Petrobras. The two-year probe has led to the jailing of dozens of top businessmen and politicians from across the political spectrum, and threatens many of the same lawmakers who voted to remove Rousseff.

Rousseff argued that many opponents just wanted her out of the way so they could save their own skins by tampering with the investigation, which Rousseff had refused to do.

Many lawmakers and Brazilians nationwide, meanwhile, blamed Rousseff for the graft even though she has never been personally implicated. They argued that she had to know, as many of the alleged bribes happened while her party was in power.

Rousseff’s removal creates many questions that are not easily answered. Michel Temer, her vice president who became her nemesis, will serve out the remainder of her term through 2018. He was sworn in Wednesday afternoon, and was expected to address the nation in the evening.

But Brazilians have already gotten a taste of Temer’s leadership, and they are clearly unimpressed.

In May, Temer took over as interim president after the Senate impeached and suspended Rousseff. The 75-year-old career politician named a Cabinet of all-white men, a decision roundly criticized in a nation that is more than 50 percent nonwhite. Three of his ministers were forced to resign within weeks of taking their jobs because of corruption allegations, which also follow Temer and threaten his hold on power.

When Temer announced the opening of the Olympics on Aug. 5, he was so vociferously booed that he remained out of sight for the remainder of the games.

Rousseff’s allies have vowed to appeal to the country’s highest court. While previous petitions to the court have failed to stop the impeachment process, at the very least legal wrangling will keep the issue front and center.

The decision also leaves many question marks over the economy, expected to decline for a second straight year. Temer has promised to pull the country of 200 million people from its recession by tackling reforms that have long been taboo, such as slimming public pensions.

But he has not been able to accomplish much the last three months as interim president, and it remains to be seen whether Congress will be willing to work with him.

Several polls have shown that Brazilians prefer new elections to solve the crisis.

For that to happen, however, Temer would have to be removed from office or resign, something he clearly has no intention of doing.

Speaking to supporters at the presidential residence, Rousseff promised to mount a strong opposition, but didn’t elaborate.