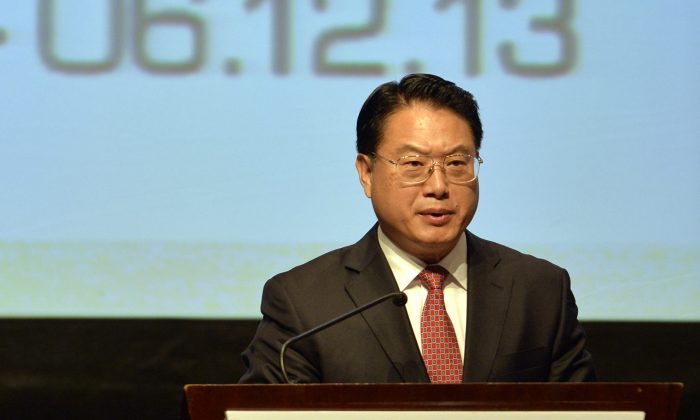 Brazil may hold the Chinese regime at arm’s length if leading presidential candidate Jair Bolsonaro, an outspoken critic of Beijing, is elected next week, though a senior Brazilian diplomat has denied persistent speculation that his government may withdraw imminently from the China-controlled United Nations Industrial Development Organization (UNIDO).

European Union diplomats based in Vienna had speculated that Brazil, which has been cutting back on commitments to international organizations, would leave UNIDO imminently with a debt.

André João Rypl, Brazil’s diplomat in charge of the UNIDO portfolio, has strongly denied that Brazil plans to leave UNIDO, however, and has insisted that Brazil has more or less settled its debt.

“Over the last year and a half, we made payments in excess of 23 million Euro and have settled much of our debt,” he said in an email.

“We now owe only a small residual amount corresponding to a fraction of the 2017 contribution (approx. 1 million Euro). The 2018 contribution (together with this 2017 residue) should be paid by late December. According to Brazilian law, any contribution is only due by the last working day in the year, so we are not in arrears for the 2018 fees.”

The ambassador added that Brazil remains active in UNIDO, pointing out that “for example next November, we will hold a seminar on Diplomacy and Technology in Brasilia with a keynote speaker from UNIDO.”

Nevertheless, many Western countries are concerned UNIDO is being used by Beijing to promote its dubious development policies such as its One Belt, One Road initiative (OBOR) globally. Should Bolsonaro win, Brazil might review its policy on UNIDO as well as wider policy issues with China, an important trading partner, the sources in Vienna say. Bolsonaro has portrayed China, its largest trading partner, as a predator seeking to control key sectors of Brazil’s economy.

“China is playing hell with UNIDO and is openly using it to implement OBOR worldwide,” one senior Vienna-based EU source said, speaking on condition of anonymity.

China formally disclosed its OBOR in 2013, revealing an ambitious scheme to link China by sea and land to more than 60 countries across Asia, Europe, and Africa.

Li Yong, a former Chinese vice minister in China’s finance ministry, has been director general of UNIDO from 2013 and is due to remain atop the agency until December 2021.

In September 2017, UNIDO played host to an international conference in Vienna on OBOR, together with the Finance Centre for South-South Cooperation, which is headed by a former top Chinese banking official, Cai E’sheng.

Senior U.N. officials, including Secretary-General António Guterres, repeatedly have depicted the OBOR as a crucial pillar in a U.N.-sponsored plan to slash global poverty by 2030.

The Chinese initiative, Guterres said in a speech before the OBOR in Beijing in May 2017, holds “immense potential” and promises greater market access for “countries yearning to become more integrated with the global economy.”

But Beijing faces burgeoning criticism for placing unsustainable debt burdens on impoverished nations and fueling concern that the OBOR program is a trojan horse for projecting China’s economic and military interests, and that the program has become ensnared in widespread corruption.

In Sri Lanka, the Hambantota port was the brainchild of then-President Mahinda Rajapaksa. While the island was isolated internationally after a harsh military crackdown on separatist Tamil Tigers, involving massive human-rights abuses, Rajapaksa approached China for loans. Vast sums of money reportedly flowed from the Chinese’s port construction fund to Rajapaksa’s election campaign, foreign media reported. In spite of Chinese support he lost, however.

Questions have also been raised about Chinese investment allegedly encouraging corruption in Pakistan, Malaysia, and the Maldives. Malaysia’s longstanding rule by the National Front coalition ended this year.

Malaysia’s new government reviewed what it sees as the one-sided OBOR deals signed by the previous administration and has canceled several contracts.

“Such stupidity has never been seen before in the history of Malaysia,” Malaysian Prime Minister Mahathir Mohamad said.

In addition to UNIDO, Chinese control of the U.N. Department of Economic and Social Affairs (UN DESA) has played a major role in promoting OBOR. Since 2007, China has held the top position in the DESA, which previously was seen as a U.N. backwater holding conferences and drawing up economic case studies for underdeveloped states. The current head of US DESA is the former Chinese Ambassador to the U.N., Liu Zhenmin.

In 2016, Helen Clark of New Zealand, then head of the U.N. Development Program (UNDP), signed the first memorandum of understanding with China, promising cooperation on the OBOR. Clark was fighting a campaign to become the U.N. secretary-general and was seeking China’s support in the vote, Foreign Policy reported. However, she strongly denies supporting OBOR to further her ambition to head the U.N.

The United States withdrew from UNIDO, effective in 1996. Britain withdrew from UNIDO in 2012 after its 2011 Multilateral Aid Review concluded that there was no “evidence of UNIDO having a significant impact on global poverty,” and that it was beset by “a wide range of organizational weaknesses including limited transparency, weak results reporting, and weak financial management,” and that it was duplicative of other U.N. organizations.

U.N. watchers see the Chinese promotion of its interests through UNIDO and UN DESA as part of a wider hijacking by Beijing of U.N. and other international agencies, underlined by Interpol’s refusal to allow Taiwan to attend a conference in Dubai in November, and blocking of the island from participating at a recent U.N. International Civil Aviation Organization assembly meeting.

A spokesperson for UNIDO said in an email to The Epoch Times that there is no controversy surrounding the leadership of the organization, and that UNIDO “promotes the interests of all of its 168 member states equally.”

“UNIDO is working with the ‘Belt and Road Initiative’ (BRI) as we also promote win-win cooperation, prosperity, and inclusiveness to achieve the Sustainable Development Goals and 2030 Agenda,” said Ravindra Wickremasinghe.

“The Director General believes that ‘The Belt and Road Initiative, with its emphasis on inclusive partnership and cooperation, can serve as an effective tool for the advancement of the 2030 Agenda,” he added.

This report was updated on Oct. 26 with comments from Brazilian representative André João Rypl and UNIDO to reflect that Brazil has not made any announcements that it is leaving UNIDO, and that Brazil has paid 23 million euros to settle its debt. The Epoch Times regrets the omission.