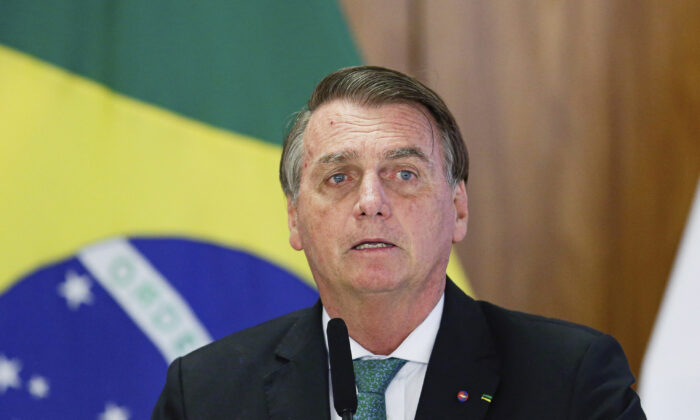 Bolsonaro, 67, was taken to the Army Hospital in Brasilia for testing, Faria said, noting that “he is alright.”

Faria said the president felt unwell and went to the hospital to be tested as he has a history of intestinal obstructions.

Bolsonaro will stay in hospital overnight under observation, Faria said.

The president has undergone multiple emergency surgeries after he was stabbed on a campaign trail in September 2018. He has also undergone surgeries to correct a hernia in the wounded area.

He was most recently hospitalized in January to clear an intestinal obstruction and was discharged two days later without needing surgery.

“Being discharged now. Thank you all,” Bolsonaro said on Twitter in January, sharing a photograph of himself beside his doctors giving a thumbs up.

In July last year, after 11 days of hiccuping, he was hospitalized with strong stomach pains that were treated without needing surgery.

Bolsonaro, who has begun campaigning for re-election in October, was due to attend a political meeting of the Republican Party but did not appear, local media reported.

The party’s president Marcos Pereira said at the event that the president had instead gone to hospital feeling unwell, an aide to Pereira said.

The conservative president kicked off his re-election campaign on Sunday.

“First Lady, receive my regards, our prayers,” Pereira told attendees. “I’m sure the president is fine—it’s just some tests he’s doing, so he’s not here.”

In August last year, Bolsonaro said he sees three alternatives for his future: winning the 2022 presidential elections, death or prison.

“I have three alternatives for my future: being arrested, killed or victory,” he said, in remarks to a meeting of evangelical leaders. Bolsonaro later added that the first option is out of the question. “No man on Earth will threaten me.”

He questioned Brazil’s electronic voting system last year and called for the adoption of printed receipts, saying that electronic ballots are vulnerable to fraud.

Bolsonaro was left in serious condition after the stabbing incident in the town of Juiz de Fora in 2018. A man rushed up to him as he was being carried on the shoulders of a supporter through a crowd, and stabbed him in the abdomen.

His son said on Twitter at the time that Bolsonaro was “almost dead” when he arrived at the Santa Casa de Misericórdia hospital.