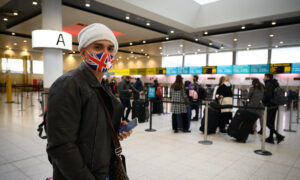 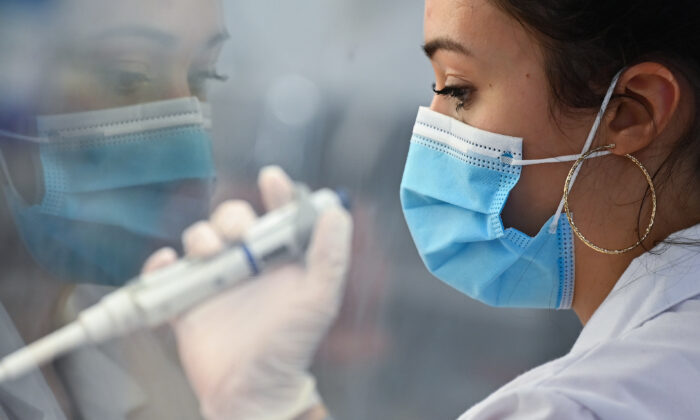 A laboratory technician uses a pipette device to process samples to test for the CCP virus, at Biogroup Laboratory's lab in west London, on Jan. 21, 2021. (Justin Tallis/AFP via Getty Images)
UK

Up to six cases of the CCP virus variant first identified in the Brazilian city of Manaus have been detected in the UK, Public Health England (PHE) said on Sunday.

Two of the cases in England are from one household in South Gloucestershire with a history of travel to Brazil. One of the infected people, who had travelled to Brazil recently, has been isolating at home with their household since returning to the UK, PHE said.

UK health authorities are following up with all passengers on Swiss Air flight LX318 travelling from Sao Paulo via Zurich and landing in London Heathrow on Feb. 10 to test them and their households.

PHE said the risk to the wider community is low, but surge asymptomatic testing has been deployed in South Gloucestershire to identify and contain possible community spread.

Authorities are still trying to track down the third infected individual, whose follow-up details are not available because they did not complete their test registration card.

Up to 6 cases of the Variant of Concern first identified in Manaus, Brazil (P.1) have been detected in the UK: https://t.co/NxiBAaLVss pic.twitter.com/CZLBVd7hJe

The three cases in Scotland also recently travelled back from Brazil.

“Following their return to North East Scotland from Brazil, via Paris and London, three Scottish residents entered self-isolation and then subsequently tested positive for Coronavirus (COVID-19). These individuals then self-isolated for the required period of 10 days,” the Scottish government said on Sunday.

The Scottish authorities are contacting other passengers on the flight used by the three individuals from London to Aberdeen.

The Brazilian P.1 variant “carries several mutations that are seen in other variants of concern that are predicted to change the behaviour of the virus,” said Nick Loman, professor of microbial genomics and bioinformatics at the University of Birmingham.

“Recent reports from Manaus in Brazil, where the P.1 variant is fuelling a surge in infections, suggest that this variant is responsible for re-infecting individuals who were previously infected with a different variant of the virus,” said Lawrence Young, professor of molecular oncology at Warwick Medical School.

“It is likely that the P.1 variant is driving the current surge in infected cases due to re-infection as a consequence of both waning antibody responses and the P.1 variant’s ability to evade antibodies induced from previous infection with a different variant,” he said.