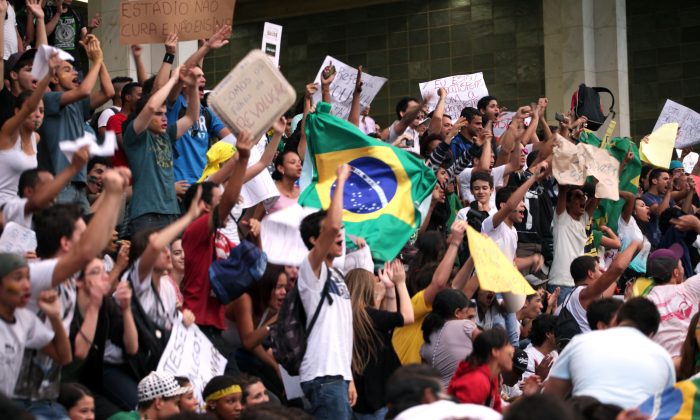 Brazilian Protesters: It’s Not About 20 Cents

RIO DE JANEIRO—Protesters hit the streets in over 100 cities in Brazil Thursday despite a concession by authorities to revoke a public transport fare hike.

The revocation of the fare hike, which sparked the protests two weeks ago, was celebrated as a victory by protesters across Brazil. But they say that it’s about much more than the 20 cent (US$0.09) price hike.

“It’s not really about the price anymore,” said Camila Sena, an 18-year-old university student at a Wednesday protest in Rio de Janeiro’s sister city of Niteroi. “People are so disgusted with the system, so fed up that now we’re demanding change.”

Protesters from varying backgrounds and ages have joined the protests, each with their own grievances. Common dissatisfactions among the protesters are government corruption and the poor state of the country’s health care and education.

Many are also calling on authorities to investigate alleged irregularities in the organization of the 2014 World Cup in Brazil.

Sena said that seeing money poured into soccer stadiums for the current Confederations Cup and next year’s World Cup only added fuel to people’s anger.

The protests, which started June 13, don’t have clear organizers, with many of the protests driven by social media. A group that calls itself Anonymous Brasil, has been calling on people online to participate in the protests.